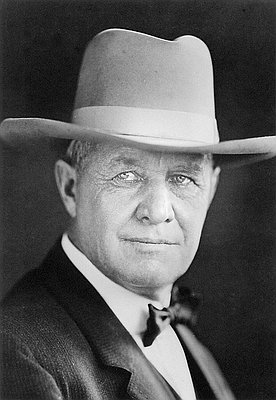 This portrait of Walter Pierce was taken in 1923. Pierce served in a number of public offices in Oregon, including governor from 1923 to 1927 and U.S. congressional representative from 1932 to 1942.

Walter Marcus Pierce was born on his parents’ farm in Grundy County, Illinois, on May 30, 1861. His father was a Jacksonian Democrat and often took Pierce to public meetings and political debates as a child, sparking a lifelong interest in politics.

Pierce taught school for several years in Illinois before heading west. After living in Colorado and Kansas, he moved to Oregon in 1882, arriving in Portland with $40 in his pocket. He found work in Milton making hay, and the following year he was hired as a school teacher at the town’s only school. He taught school in Milton until 1886, when he was elected superintendent of public schools for Umatilla County.

Pierce served as superintendent of schools until 1890, when he was elected county clerk. After earning his law degree in 1896, he lived in Pendleton and La Grande, where he practiced law, speculated in land, ran a farm and a cattle ranch, and owned and operated the Grande Ronde Electric Company.

A progressive Democrat, Pierce won a seat in the state senate in 1902, but lost it four years later; he also lost a 1912 race for U.S. Senator and a 1918 bid for governor. Undaunted, he finally won the governor’s seat in 1922, beating incumbent Ben Olcott. Pierce’s victory was due in part to the assistance of the Ku Klux Klan, though Pierce’s relationship to the Klan is unclear; he was probably not a member, but he did court their support. Pierce lost his bid for reelection in 1926, but was elected to the U.S. House of Representatives in 1932 to represent Oregon’s second congressional district. Running as a populist, his slogan was “Living Wages for the Unemployed Rather than Doles for Big Business.” He was a loyal New Dealer, supporting President Franklin Roosevelt’s policies, especially public power. He remained in the House until 1942, when he lost his seat to Republican Lowell Stockman.

Pierce believed he made four important contributions during his political career: the advancement of popular government, the development of Columbia River hydropower, the passage of Oregon’s first graduated income tax, and the inclusion of wheat in the agricultural price support loan program.

After his retirement from politics in 1942, Pierce moved to the Eola Hills near Salem, where he lived until his death on March 27, 1954.

'This 1918 campaign card—showing here the front and back—promoted the political candidacy of Walter M. Pierce, a Democratic state senator, in his first bid for Oregon’s gubernatorial chair. Pierce lost his first election, but in 1922 won Oregon’s governorship with the support of the Ku Klux Klan. He lost …