A New Status for the American Indian 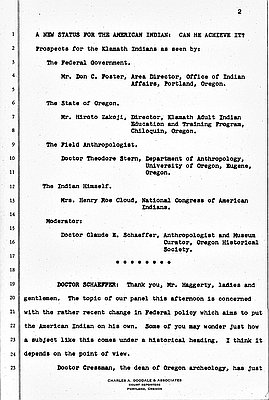 On March 23, 1957, the Oregon Historical Society held its Third Annual Historical Forum, a discussion of events that had influenced Oregon’s political, social, cultural, and natural environment.  “A New Status for the American Indian: Can He Achieve It?” was a historical discussion of the Klamath Termination Act of 1954, which terminated federal recognition of the Klamath Tribes, discontinued supplemental human services, and stripped tribal rights to 1.8 million acres of land.

Don C. Foster, Area Director of the Office of Indian Affairs, represented the Federal Government and asserted that the Treaty of 1864, which created the Klamath Reservation, did not “indicate that the Federal Government…has any responsibility other than the trusteeship of the reservation.”  “[O]ur Indian people,” Foster criticized, “have lost [their] pride,” and, he concluded, “[T]hese folks are just simply going to have to grow up and…face life realistically…”  Hiroto Zakoji, Director of the Klamath Adult Indian Education and Training Program and representing the State of Oregon, emphasized at the forum that termination should ultimately “help the Indian people without destroying their native culture or values and patterns of living….”  University of Oregon Anthropologist Theodore Stern discussed how termination would end special privileges awarded the Klamath Tribes, such as private hospitals, schools, and tax-free income.  Stern, however, was concerned about the overall administration of the policy and whether it would be successful.

Mrs. Henry Roe Cloud of the National Congress of American Indians shared with the audience a conversation she recently had had with a U.S. Senator.  “I had met this distinguished Senator many times….  He turned to me and said, ‘Well, Mrs. Roe Cloud, what are you doing here?  Don’t you want to be assimilated?  Don’t you want to be integrated?  Don’t you want to have your freedom?  Don’t you want education?’”  “As to assimilation,” Mrs. Roe Cloud explained to the Senator, “I just love being an Indian.  And, as to integration, I think I’m already integrated—maybe too much so.  And freedom…most of us have more freedom than we can possibly handle.  And thirdly, I feel that I have some measure of education.”  Mrs. Roe Cloud concluded by stressing that Native Americans wanted a voice in their own affairs, to assume responsibility for their own actions, and to participate in decisions that would affect their lives and future.  In 1986, Congress reestablished the Klamath Reservation.  By then, however, most of the tribal lands had been incorporated into the Winema National Forest.