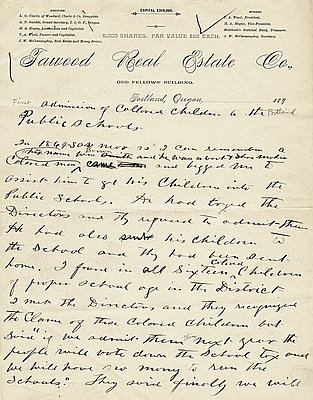 In 1867—not in 1854 or 1855 as Wood remembered—William Brown attempted to admit his children to Central, one of two public common schools in Portland. The school board of directors refused him because he and his children were black.

The system of free, public education in Portland was young and fragile during the 1860s. Even as attendance boomed at the city’s public schools mid decade, the directors were not confident that the taxpayers of Portland would accept contributing to the education of black students.

Brown was not deterred, however. On behalf of the sixteen eligible black and mulatto children in the school district, Brown solicited the aid of Wood to reason with the directors. Unsatisfied with the directors’ offer to refund the black residents’ school tax money, Wood suggested that the school district provide a segregated school for the black and mulatto community.

When the directors originally refused this offer, Wood and Brown secured the services of David Logan, an attorney and a former Portland mayor. Together the men filed a legal action. Perhaps realizing that they had no legal basis to exclude blacks from the public school system, the school board voted to accept Wood’s proposal for a separate school before the case went to court.

Despite Wood’s assertion that “the colored people were made happy” by the segregated school, the historical record offers no insight into the black community’s true feelings over the compromised victory they achieved. Documentation exists to suggest continued racism, however. 1869 newspapers reported complaints of harassment of the black pupils at the hand of white passers-by, possibly compelling the school board to replace the female teacher with a male in 1870.

The decision to cut funding for the segregated school was a common agenda item at annual school board meetings. Finally, at the 1872 meeting, a motion to abolish the school carried, which, in turn, integrated the remaining schools in the district.

Born in Brooklyn, New York, McCants Stewart was the son of a respected Black civic leader and confidant of Booker T. Washington. At age sixteen, Stewart entered Washington's Tuskegee Institute in Alabama. Stewart resisted the strict discipline imposed by Tuskegee, and suffered a brief suspension before his eventual graduation in …