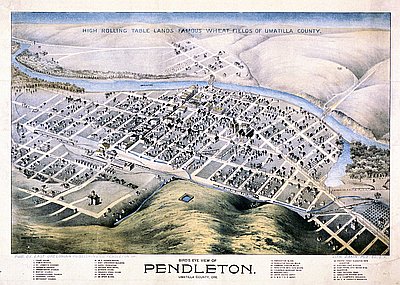 This bird’s-eye view, published by the East Oregonian Publishing Company, shows the town of Pendleton around 1890. Bird’s eye views, also known as panoramic maps, were popular ways of depicting towns and cities in North America during the late nineteenth and early twentieth centuries. They were usually prepared for local businesses, chambers of commerce, and other civic organizations as a way to boost civic pride and to encourage commercial growth.

Before it was designated the Umatilla County seat in 1868, Pendleton was known as Marshall and Swift’s Station or Middletown. A stopping over point along the Oregon Trail, only four or five families lived there when it was designated the county seat. In 1868, Moses Goodwin, a local settler who operated a small hotel and a blacksmith shop, deeded 2½ acres of land to Umatilla County for county buildings. This land formed the core of the new townsite, which was named Pendleton after former vice-presidential candidate George Hunt Pendleton, a Democrat from Ohio who was seeking his party’s nomination for president that year.

Pendleton grew slowly over the next decade, benefiting from its location on the Oregon Trail. By 1882 it had a population of about 700 people. The 1880s would see the town boom, however, with the population expanding more than threefold to over 2,500 by 1890. It became one of the principal wool-shipping centers in the inland Northwest, particularly after the construction of the Oregon Railway & Navigation Company railroad in September 1882. The town gained a transcontinental connection on December 1, 1884, when the tracks of the Oregon Short Line and the OR&N were joined at Huntington. These railroad linkages enabled the town to grow in leaps and bounds. Since it was running out of room to grow, 640 acres of the nearby Umatilla Indian Reservation were transferred to the town by an act of Congress in 1884. This land was quickly platted and sold off at auction.

By 1890, geographer Donald Meinig notes, Pendleton was “one of the most prosperous and progressive towns in the interior.” It had well-graded streets, a new electric light system, a new water system, eight churches, a good public school system, and twenty fraternal organizations. The town's economy was also doing well, with two large woolen mills, flour mills, a foundry, a planing mill, and two railroad lines running through town, connecting it to markets in Portland, the Puget Sound, and the eastern United States.

When Captain Meriwether Lewis passed through the Columbia Plateau in the spring of 1806, he wrote that he had not seen “a single horse which could be deemed poor and many of them were as fat as seals.” The rich grasslands of the Plateau provided year-round nourishment for the vast …