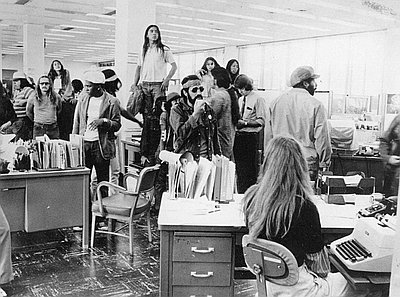 On the morning of August 15, 1975, about 100 Indian protesters took over the Portland offices of the Bonneville Power Administration (BPA), a federal agency that markets power produced by federal dams in the Pacific Northwest. This action was the culmination of almost two weeks of activities organized to protest what Native activists considered to be federal repression on South Dakota’s Pine Ridge and Rosebud Indian reservations.

Office takeovers and other acts of civil disobedience were common tactics among Indian activists during the 1960s and 1970s. In November 1969, Indian protesters seized San Francisco’s Alcatraz Island to raise awareness about Native land issues, occupying the island for more than 19 months. In November 1972, members of the American Indian Movement (AIM) took over the Bureau of Indian Affairs’ Washington, D.C., offices for a week, culminating their Trail of Broken Treaties campaign. A few months later, AIM members occupied the community of Wounded Knee on the Pine Ridge Indian Reservation for more than two months, enduring a federal siege in which two AIM protesters were killed.

Two years after the occupation of Wounded Knee, federal officers engaged AIM members in a firefight on the Pine Ridge Indian Reservation, resulting in the death of two FBI agents and a 24-year-old Coeur D’Alene Indian by the name of Joseph Stuntz. The August 1975 takeover of the BPA office and the six-day march from Olympia, Washington, that preceeded the takeover were organized in response to the killing of Stuntz. The protesters involved in the action demanded “an end to the undeclared state of martial law in South Dakota,” as well as restitution for Stuntz’s young widow. When an aide to the Secretary of the Interior promised to pass the message along to his superior, the activists quietly disbanded.