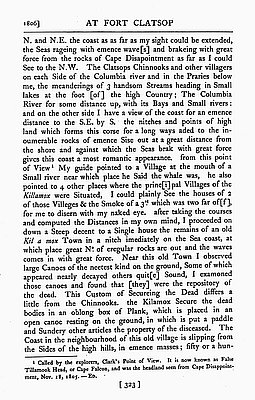 In the journal entry reproduced here, Captain William Clark offers a detailed description of the northern Oregon coast as he encountered it on January 8, 1806. Standing at the top of Tillamook Head, Clark described the view in every direction, noting the natural features of the landscape as well as the Indian villages that could be seen. Among the Native groups he identified were the “Killamox,” better known as the Tillamook.

The Tillamook were a group of related Salishan-speaking communities on the central and northern Oregon coast. Clark wrote that there were five principal Tillamook villages in 1806, three of which he could see from his vantage point. He estimated their population at about 1,000, though their numbers had already been reduced by two smallpox epidemics probably introduced by maritime fur traders in the late 1770s and again in 1801. Clark described a number of large burial canoes near an old village site, possibly depopulated by this devasting disease.

Clark observed that the Tillamook were culturally quite similar to the Clatsop and other Chinookan peoples of the Columbia River. Even though the Tillamook spoke a different language, they interacted frequently with their immediate neighbors to the north, south, and east. The first peoples of the Oregon and Washington coast were culturally and economically linked by a trade network that centered on the lower Columbia River.

Whale blubber and oil were valuable items in this regional trade network. In January 1806, Clark led a party south from Fort Clatsop hoping to obtain blubber and oil from a whale that had washed ashore at present-day Cannon Beach. However, the explorers were disappointed to find the Tillamook reluctant to part with the blubber and oil they had stripped from the carcass. The white men simply did not have much the Indians wanted. Clark’s account suggests that the Tillamook had plans to trade some of the whale parts for wapato, a potato-like food that was the specialty of the Multnomah and other Chinookan groups in the vicinity of present-day Portland and Vancouver.

On June 14, 2004, historians William L. Lang and Carl Abbott joined Roberta Conner (Umatilla, Cayuse, Nez Perce), director of the Tasmástlikt Cultural Institute and vice president of the National Lewis and Clark Bicentennial Council Board of Directors, for a conversation about the legacy of the Lewis and Clark Expedition …