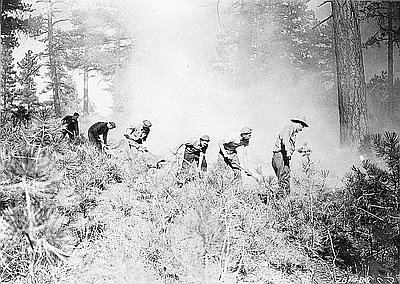 Several thousand young men came from around the country to work in Oregon’s forests, parks, and public lands. While most worked for state and national forest services, some participated in soil conservation and irrigation projects. Enrollees fought forest fires and built hiking trails, forest roads, fire lookouts, and picnic areas.

In 1940, Oregon had sixty-one CCC camps. Members lived in military-style barracks throughout the state during their six-month service periods. They received a monthly $30 stipend and participated in educational programs.

Further Reading:
Hill, Edwin G. In the Shadow of the Mountain. Pullman, Wash., 1990.

The Veterans Lottery and the CCC

After World War II ended, the Bureau of Reclamation (BOR) made eighty-six Klamath Project farm units of 160 acres or less available for homesteading. To be eligible for the lottery, one had to have prior farming experience, a record of service during the war, some cash, good health, and a …