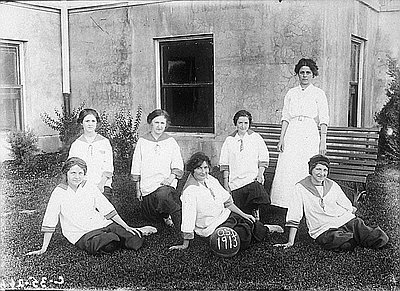 This photograph shows the 1913 girls’ basketball team at the Oregon School for the Deaf. The school, which still exists, represents a state effort to provide education for students with special needs.

In 1870, the Oregon State Legislature voted to fund the creation of the “Deaf and Mute Institute” in Salem, which later was renamed the Oregon School for the Deaf. Several years later, the legislature established a school for blind students. Both state schools continue to offer students free education and boarding.

The Oregon School for the Deaf moved several times before finally settling in 1910 onto a 52-acre campus in North Salem. The school administrators housed students in dormitories and offered academic and industrial training. The facilities included a laundry, a student gardens, and a gymnasium.  A 1913 biennial school report stated the school’s gymnasium was “in constant use for basketball and is greatly appreciated.” The report also said that many of the school’s graduates were “making good” in the outside world, proving “the great practical value of the work the school is accomplishing.”

Nation-wide, most states educated deaf students in segregated schools until 1975, when Congress passed a law stating that handicapped children should be integrated into schools with their non-handicapped peers. Many parents then had the opportunity to send their deaf children to local schools, where they were taught in non-integrated special education classrooms. Since that time, there has been a movement to include deaf students in regular classrooms.

Mainstreaming, or integrating, deaf students into schools and classrooms with hearing children caused a decline in the number of students at the Oregon School for the Deaf, but the state department of education reports that enrollment is now stable. In 2002, the school had about 130 students between ages of five and twenty-one. Despite the move away from segregated schools, school administrators argue that interaction between deaf students in a separate community instills confidence and helps the children develop into “self-fulfilled, productive citizens.”