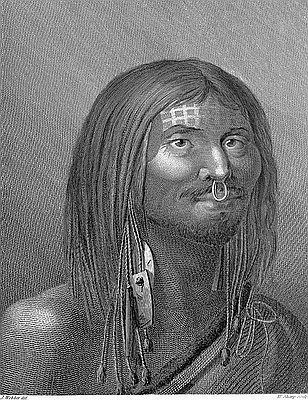 This engraving is from a 1778 portrait by John Webber, the artist who was assigned to accompany James Cook’s third expedition to explore the Pacific. Webber was the first European artist to document the appearance and culture of the Mowachaht people who occupied Nootka Sound on the west coast of Vancouver Island. The Mowachaht were part of a larger group of linguistically related tribes called the Nuu-Chah-Nulth, a people who have been historically referred to as the Nootka.

The impact of Enlightenment thinking on the late-eighteenth century voyages of discovery cannot be overlooked when studying the history of the Euro-American presence on the Northwest Coast. Many of the major expeditions that entered the North Pacific during this period were surveying the region for scientific knowledge as much as they were for political reasons. The addition of scientific personnel such as naturalists and botanists to the crews of the expeditions helped document the discoveries made by each expedition. The records left by these scientists, remain an essential source of information about the geography, plants, animals, and especially the people of the Pacific Northwest and Alaska.

The depictions of the people, landscapes, and other observable phenomena made by the artists who accompanied these expeditions have become a vital part of not only the histories of the expeditions but the history of the entire region. John Webber, whose training as an artist set him apart from the other draftsmen on Cook’s expedition, created images of such quality they are among the finest representations of the early history of the North Pacific Coast. Webber’s role in helping prepare the subsequent engravings for inclusion in published accounts of Cook’s last journey ensured that the resulting images would remain true to his original paintings and drawings. Engravings made from the works of other artists often show signs of distortion due to embellishment by the engravers.

The Spanish expeditions, too, had their notable artists, namely Tomás de Suría and José Cardero, both of whom accompanied the Malaspina expedition to Alaska and Nootka Sound in 1791. Cardero’s drawings of Puerto Nunez Gaona (Neah Bay) are the only images of the short-lived Spanish settlement at the tip of the Olympic Peninsula

Cutter, Donald C. ed. Journal of Tomás de Suría of his Voyage with Malaspina to the Northwest Coast of America in 1791. Fairfield, Wash., 1980.