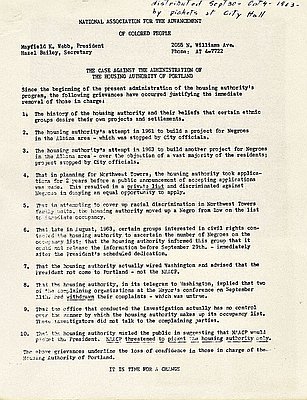 This flier was distributed by protesters of the National Association for the Advancement of Colored People (NAACP) on September 30 and October 4, 1963, at Portland’s City Hall and the nearby Federal Building to draw attention to the segregationist practices of the Housing Authority of Portland (HAP) and the NAACP’s demands for “the immediate removal of those in charge.”  The flier’s first five grievances address HAP’s history of planning racially-segregated housing projects.  The second five points respond to the news media’s portrayal of the NAACP as being primarily responsible for the cancellation of a planned September 27th visit to Portland by President John F. Kennedy.

HAP’s relations with Portland’s African-American community had never been strong and struggles over proposed public housing projects in the Albina neighborhood during the early-1960s only exacerbated them. HAP’s twice-repeated efforts to locate large, low-rent housing projects in Albina galvanized community support against the public agency. Additionally, the way in which HAP chairman Roy F. Renoud and executive director Gene W. Rossman repeatedly dismissed Albina’s community leaders as “self-appointed,” ignored local sentiment, and supported housing projects that reinforced Portland’s segregated living environment, made many African Americans lose faith in the agency by the fall of 1963.

When President Kennedy announced a September 27th  stop in Portland to dedicate HAP’s Northwest Tower at NW 19th and Everett, the first low-rent high-rise designed specifically for the elderly on the West Coast, local housing advocates were shocked.  Portland’s Mayor Terry Schrunk tried to mediate differences between HAP and local housing advocates regarding the project, but since ninety-nine percent of the Tower’s residents were white, living in a white neighborhood, it seemed only to confirm HAP’s contribution to racial segregation.

The NAACP, Portland Urban League, and Citizen’s League for Equal Opportunity (CLEO) tried to dissuade the president from dedicating the Northwest Tower during his visit by sending a telegram to Oregon’s Democratic congresswoman, Edith Green.  “All responsible organizations on Portland race-relations front have lost confidence in housing authority here because of long history of subtle segregation policies.  We feel president would make great mistake in appearing in support of project and face demonstrations by groups otherwise wholly friendly and eager to help welcome him in Portland.”

A second telegram was sent to Rep. Green from HAP advising that the president cancel his appearance at the dedication of the Northwest Tower to avoid embarrassment.  On September 19th, President Kennedy announced he would bypass Portland during his travels.  The local news was quick to blame would-be-picketers and heaped wide-spread criticism on the NAACP, whose supporters were portrayed as ungrateful instigators and extremists.