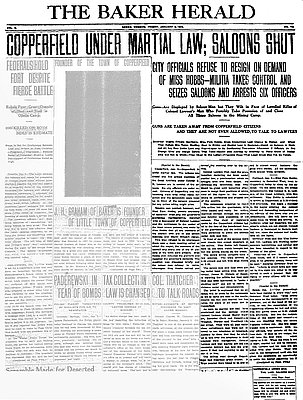 This article, headlined “Copperfield Under Martial Law; Saloons Shut,” was published in the Baker Herald on January 2, 1914. It describes the declaration of martial law in the small town of Copperfield, formerly located on the Snake River about fifty miles northeast of Baker City.

The story of Copperfield began in 1895 when copper was discovered in Idaho’s Seven Devils country. Copper ore was transported from the mines to the Snake River, where it was ferried across to a small mining camp on the Oregon side. A post office was established at the camp in 1899, the same year Baker City resident J.H. Graham visited the area and named it Copperfield.

By 1910 Copperfield was enjoying an unprecedented boom as hundreds of workers from nearby railroad and power projects filled the town and its many saloons. It was during this brief boom period that Copperfield earned a reputation as Oregon’s most raucous community, a rough and tumble town with more than a dozen saloons but no churches. However, the town’s peak quickly passed as the construction projects came to an end. By the time Copperfield was incorporated in 1913, the town only had a few dozen residents remaining.

The decline of the town’s fortunes led to increasingly hostile competition between the remaining saloon owners, one faction of which dominated the town’s government. In the fall of 1913, Oregon’s reformist governor Oswald West received a petition supposedly signed by most of Copperfield’s residents alleging that town officials were engaged in a host of illegal activities, including abuse of public office.

West, a fervent opponent of saloons, threatened to send in the national guard if Baker County officials did not “clean up” the town. The sheriff and district attorney considered the town’s problems to be a mere squabble between business rivals, but the governor wanted to make an example out of both the town and the county. The result is described in the newspaper article reproduced here.

Copperfield remained under martial law for the rest of 1914, creating some resentment in eastern Oregon. The Baker Herald, for instance, argued that West’s actions were unnecessarily heavy-handed. The saloonmen whose property was seized by the state appealed to the courts, but the Oregon Supreme Court ruled in November 1914 that the governor had acted within the bounds of the law. That same month Oregon voters approved a constitutional amendment banning the manufacture, sale, or advertisement of alcohol.

None of Copperfield’s saloons ever reopened, and the town’s few remaining residents slowly drifted away. Copperfield was all but gone by 1927, the year the post office closed. The town of Oxbow was established near the Copperfield townsite in the 1960s.

Oswald West was known for his fiery statements. A supporter of prohibition, he declared that one of his ambitions was “to shoot a bartender.” As governor from 1911 to 1915 West cracked down on drinking and gambling, in one instance using the Oregon National Guard to enforce martial law in …