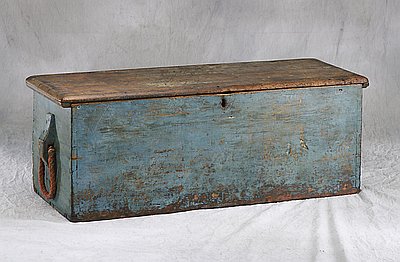 This chest is believed to have accompanied Captain Robert Gray on the second voyage of the Columbia Rediviva to the Northwest Coast, during which Gray made the first documented exploration of the Columbia River. Gray’s granddaughter, Mary E. Bancroft, sent the chest to Oregon in 1892 to celebrate the centennial of Gray’s exploration. It was subsequently donated to the Oregon Historical Society.

Little is known about Robert Gray’s early life. He was born in Tiverton, Rhode Island, on May 10, 1755. Many years after his death, Gray’s widow said that he served as an officer in the Continental Navy during the Revolutionary War, but there are no records to confirm this. In 1787 a group of Boston investors chose the thirty-two-year-old Gray to command the Lady Washington, a small sloop that was to accompany the ship Columbia to the Northwest Coast in search of furs. It was the first American expedition to the region.

Gray made two voyages to the Northwest Coast between 1787 and 1793. On the first voyage he was second-in-command under John Kendrick, an unpopular captain prone to violent outbursts. In the summer of 1788 Kendrick exchanged ships with Gray, who proceeded to China with the furs they had gathered. He then returned to Boston by way of the Cape of Good Hope, becoming the first American to circumnavigate the globe. Although the first voyage lost money, the owners of the Columbia arranged for a second expedition, hoping to recoup their loss. Gray’s name would go down in history during this second voyage. On May 11, 1792, he made the first documented exploration of the Columbia River, which he named after his ship. The expedition was a financial disappointment, but Gray’s exploration of the Columbia was of great geopolitical consequence. American legislators and diplomats would later use his “discovery” to bolster American claims to the region.

As a captain, Gray was not much more popular than Kendrick had been. John Hoskins, the supercargo of the Columbia during her second voyage, charged Gray with being a reckless seaman and complained about his lack of trading acumen. He even cast aspersions on the captain’s integrity, writing that Gray had “not the least principle of honour or honesty but appears to be divested of every virtue, and who is in grain if not openly a Knave and a Fool.”

Gray would never return to the Northwest Coast after the Columbia’s second voyage. He married Martha Atkins, the daughter of a wealthy merchant, shortly after returning to Boston, then went back to sea in command of various merchant ships. The exact date of his death is unknown, but it is believed he died of yellow fever in the summer of 1806. According to his widow, he left “four daughters and very little property.”