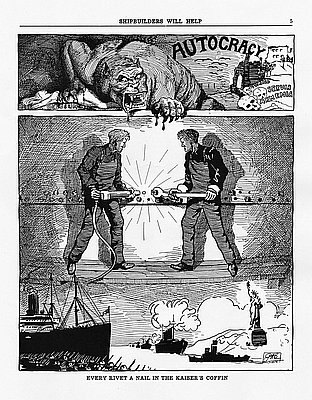 This illustration was published in a short-lived weekly newspaper produced by the Columbia River Shipbuilding Corporation (CRSC). Win the War, later renamed The Pilot, was issued in 1918 and 1919 to company employees, who built steel steamships on the Willamette River in Portland from 1916 to 1921.

Pacific Northwest steel and wood shipbuilding boomed during World War I, employing more than 50,000 people. A number of shipyards operated in Oregon first producing ships for European nations that were involved in the war in 1914. When the United States entered the war in 1917, the government requisitioned ten ships that CRSC employees were building for Britain, Norway, and France. The Emergency Fleet Corporation (EFC), a wartime federal agency, commissioned steamships with the CRSC and eight other Pacific Northwest steel shipyards, bringing large amounts of government money into the region. Because of the demand for ships, shipyards building cargo ships also flourished.

When the war ended in 1918, the Pacific Northwest shipbuilding industry suffered an immediate decline. Many orders were canceled, and shipyards shut down. The CRSC owners tried to sell their Portland shipyard but were unable to find a buyer. The entire region suffered an economic depression. By 1921, Seattle and Portland shipyards employed a total of only 1,000 people. Shipbuilding did not become an important Pacific Northwest industry again until World War II.

The southern Oregon Coast between Coos Bay and Gold Beach experienced an early and mostly unproductive mid nineteenth-century gold rush, which gave Gold Beach its name. The gold fever started in the winter of 1853, when hopeful panners flocked to the black sands of Whiskey Run Creek south of Coos …