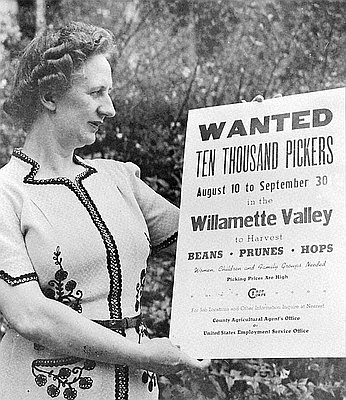 During the war, farmers throughout the Pacific Northwest and the nation experienced a serious labor shortage. Farmers increased production to meet the demands of European allies and American troops. At the same time, many people who had been farm laborers were offered higher paying jobs in the national defense industry — building ships and airplanes for the war effort — or joined the military service.

In 1943, more than 15,000 women worked as seasonal laborers on Oregon’s farms. Many Oregon women also found work in the shipbuilding companies in Portland and Vancouver, Washington.