A Nice Function to Ask a Gentleman to Attend 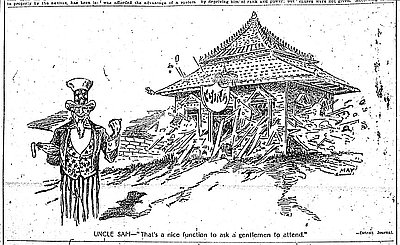 This syndicated cartoon was published in the Oregonian on March 15, 1899. It is a commentary on the rapidly changing situation in China at that time.

At the end of the nineteenth century, China was in a state of social, political, and economic upheaval. The Chinese had lost the Sino-Japanese War in 1895, forcing them to concede both Korea and Taiwan to the Japanese and to open their markets to Japanese industry. To add to China’s troubles, European powers swooped in soon after the end of the war, forcing the Chinese government to open its markets to them as well and to make numerous trade concessions in their favor. Germany, Russia, Britain, and France all carved out what they called “spheres of influence” in the Middle Kingdom.

Moreover, by the end of the nineteenth century the ruling Qing Dynasty found itself increasingly unable to unify the diverse regions of China. Its embarrassing concessions to western and Japanese imperial powers undermined public confidence in the dynasty, which had ruled China since 1644. Although the Qing government launched a massive reform effort in a bid to stay in power, a mix of oppositional forces continued to tear the empire apart from the inside.

The cartoon reproduced here depicts China as a building in a state of sad disrepair, its doors torn down and its windows broken out, reflecting both the internal and external turmoil the Chinese Empire faced at the time. While it conveys some doubt as to whether Americans should further engage themselves in China, many American business interests, particularly on the West Coast, were already supplying Chinese markets with large amounts of wheat, flour, lumber, coal, and manufactured goods.

By 1900, the United States exported more wheat to China than to any other country except England. Pacific Northwest flour millers led this trade, especially Portland’s Theodore Wilcox, often called the flour magnate of the Northwest. In 1884, mills on the Columbia River sent fewer than 5,300 barrels of flour to Chinese markets; by 1898, this number had exploded to more than 324,500. Although the flour export boom was short-lived (the Chinese soon built their own mills, undercutting Northwest millers), the China trade, long an unfulfilled goal, had finally been opened.