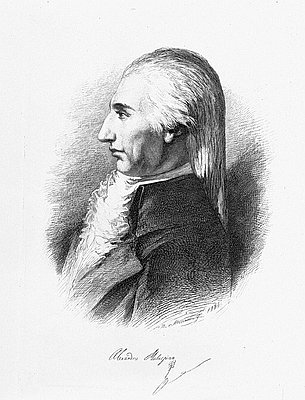 This engraving of a portrait of the Spanish navigator, Alejandro Malaspina, is found in an 1885 version of his account of the trip, A Political-Scientific Trip around the World in the Corvettes, Descubierta and Atrevida.

In 1791, under the orders of King Carlos III of Spain, Malaspina and his co-commander, José Bustamante y Guerra, abandoned their around-the-world scientific expedition and turned their attention north to Nootka Sound and the coast of Alaska. In what would be Spain’s final attempt to expand its empire up the coast of North America, Malaspina and Bustamante set out in their ships, the Descubierta and the Atrevida, to accomplish three main goals. First, they were to search the coastline off of Alaska for the ever-elusive Northwest Passage, a water route that was believed would connect the Pacific and Atlantic oceans. As a part of this exploration, they were also to assess the Russian and British presence along the coast of North America. Their second task was to chart and map their route, and to record their findings as a way to strengthen Spain’s increasingly tenuous claim to the Pacific Northwest. Finally, they were to stop at Nootka Sound to check on the status of the Spanish garrison that had been built by Captain Esteban José Martínez in 1789.

During the Malaspina’s stay at Nootka Sound, he had the opportunity to meet Maquinna, the Mowachaht leader, when the latter returned to Yuquot in 1792 after a two-year absence. Maquinna had abandoned his people’s traditional summer village in 1789 after one of Martinez’ men shot and killed his kinsman, Callicum. Maquinna spent two years at Clayoquot Sound, where his brother-in-law, Wickaninish was the headman. The murder of Callicum and the presence of the fort on Mowachaht land contributed to Maquinna’s increasing apprehension about the presence of the Spanish. Strangely enough, these fears did not stop Maquinna from reaching an agreement with Malaspina to let the Spanish continue using Nootka Sound.

The removal of Maquinna from Yuquot and his growing distrust of the Spanish indicate the beginning of a deteriorating relationship between Maquinna and the Euro American traders and explorers. In 1802, Maquinna and his men would attack the American ship, Boston, killing all aboard except the ship’s armorer, John Jewitt, and a sail maker named John Thompson. Both these men he would hold as slaves for two years.