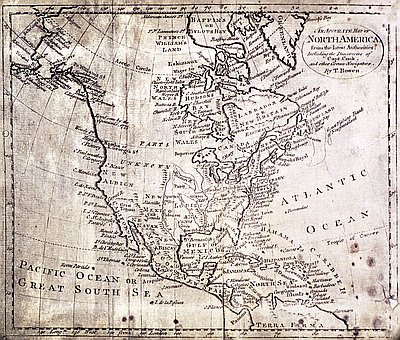 During the 1770s, European interest in the Northwest Coast intensified. Concerned about the growing Russian presence in Alaska, Spain launched a series of exploring expeditions to the region in the mid 1770s. Although these Spanish explorers could not locate the mythical Northwest Passage, they did claim the region for Spain. In order to ward off competition from her rival Great Britain, Spain chose to keep the details of these voyages secret. Equally worried about Russian expansion from Alaska and Spanish colonization northward from California, the British Admiralty sent navigator Captain James Cook on an exploring expedition to the Northwest Coast. Cook left England in July 1776 and arrived off the coast of present-day Oregon in early March 1778. Since he was unable to land due to poor weather, he named the site Cape Foulweather. Cook proceeded up the coast, braving inclement weather all the way to a secure bay in the territory of the Nootka people (Nootka Sound on Vancouver Island). Although Cook and his crew were unable to conduct detailed coastal surveys before reaching Alaska, the documents from the voyage were soon widely published, thereby providing Europeans with better information about the little-known region. Cook died in the Sandwich Islands (Hawai’i) in 1779.

In comparison to European maps of the 1770s, this updated Bowen map shows significant changes reflecting a better understanding of North American geography. The interior regions between the Great Lakes and the Northwest Coast remain “parts unknown.” However, the western coastline no longer features a western sea, a river of the west running all the way to the interior, or a strait connecting the Atlantic and Pacific Oceans. The general outline of the continent from California to Alaska is more accurate, though showing ongoing ignorance about the exact details of rivers, inlets, and islands. The Columbia River, the Strait of Juan de Fuca, Puget Sound, and Vancouver Island are noticeably absent. By this time, the speculative geography of the early eighteenth century had begun to give way to a more realistic geography based on the scientific exploration of the late eighteenth century. Following the detailed surveys conducted by Captain George Vancouver in the 1790s, the distinctive features of the Northwest Coast would later become known to European nations and the fledging United States of America.