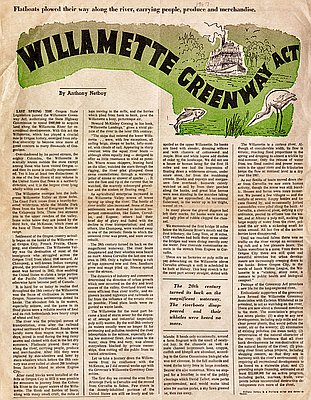 Anthony Netboy wrote this Nov. 5, 1967 article about the Willamette Greenway Act for Northwest Magazine Sunday, a supplement to the Oregonian. Netboy, who died in 1993, was a Portland-based author who wrote and collaborated on five books on Pacific and Atlantic salmon.

In 1966, Oregon State Treasurer Robert Straub first proposed public ownership and use of land along the Willamette River, during his gubernatorial campaign. Straub, a Democrat, was defeated by Republican candidate Tom McCall, who also supported a Willamette Greenway.In 1967, Governor McCall called together a committee to study the greenway and the Oregon Legislature passed the Willamette River Park System Act with the goal of establishing parks and open spaces along the river.

In 1973, the Oregon Legislature passed the Willamette River Greenway Act, which connected the greenway to a comprehensive state land use law passed that same year. In 1975, the state department of Land Conservation and Development included the Willamette River Greenway as one of nineteen standards for state-wide planning. That meant open space, public access, native vegetation, and scenic views had to be considered when planning new developments.

In 1966, Oregon’s Democratic Senator Maurine B. Neuberger presented a plan to the U.S. Congress to take public control of the banks along most of the Willamette River. The proceedings were published in the August 4 issue of the Congressional Record. Neuberger proposed that money from a federal open spaces …