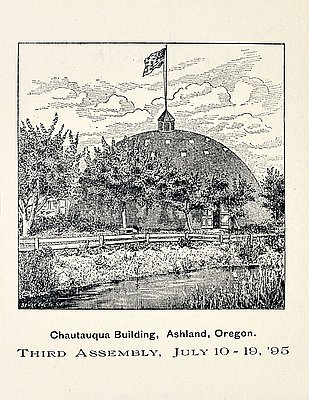 This 1895 leaflet from Ashland’s third annual Chautauqua meeting shows the town’s Chautauqua building on one side and lists the featured speakers on the other. Chautauqua was a popular educational and self-improvement movement during the late nineteenth and early twentieth centuries.

The Chautauqua idea quickly took hold across the country. In 1885, a small meeting was organized in Canby, Oregon, but this Chautauqua only lasted a year. Both Ashland and Gladstone organized more lasting Chautauquas in 1893. By this time the meetings had become non-denominational and partly secularized.

According to one local newspaper, the Chautauqua societies of Oregon were the “promoters of moral as well as intellectual culture.” The popular ten-day events featured concerts, group prayers, lectures by noted orators, baseball games, and classes on everything from geology to physical fitness.

Although Ashland’s original Chautauqua building—a beehive-shaped structure built in 1893—seated 1,000 people, hundreds were sometimes turned away from the more popular lectures. When William Jennings Bryan—a popular political figure known as the “silver-tongued orator”—came to Ashland in 1897, he attracted so many people that he was forced to give his lecture outside.

The Chautauqua circuit slowly faded away in the 1920s, the victim of radio and motion pictures. The once popular event did not completely disappear, however. The original meeting at Lake Chautauqua is still held annually, and many state humanities councils have recently revived the Chautauqua idea. The Oregon Shakespeare Festival, an annual event first organized in 1935, takes place at the old Ashland Chautauqua site.