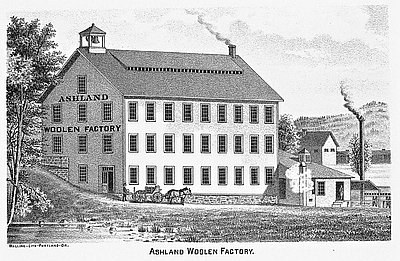 This 1884 illustration shows the Ashland Woolen Mills. The first such enterprise in Oregon was the Willamette Woolen Manufacturing Company, which began doing business in Salem in 1857. A profitable enterprise, this mill inspired entrepreneurs in the Rogue Valley to start a drive to build a woolen mill in their part of the state. By 1867, they had sold $30,000 worth of stock, enough to begin work on the new mill, which they decided to build in Ashland.

The following spring, construction of the Rogue Valley Woolen Manufacturing Company’s mill began on the banks of Ashland Creek near the present intersection of B and Water streets. The company began production by the end of the year. In 1872, the mill was sold to James Thornton, one of the first pioneers to settle in Jackson County. A few years later, Thornton renamed the firm the Ashland Woolen Manufacturing Company.

By the 1880s, the Ashland Woolen Mills, as it came to be known, was producing blankets, cashmeres, shawls, flannels, underwear, socks, and yarn for domestic and international markets. At the height of production, the mill used 16,000 pounds of wool per month, about 80 percent of the wool produced in Jackson County.

During the nineteenth century, Ashland Woolen Mills was one of the largest employers in Ashland, just a small village when the mill was first built in 1868. When the mill burned down in 1900, Ashland’s population had grown to about 3,000. Though still profitable, the mill was never rebuilt after the fire, possibly because it was underinsured.

This photograph features wool buyers at Shaniko in eastern Wasco County. In 1910, the approximate date of this photograph, Shaniko was a major transportation hub linking central and Eastern Oregon to larger markets throughout the United States.

The name “Shaniko” derives from the surname of August Schernecknau, a German emigrant. …