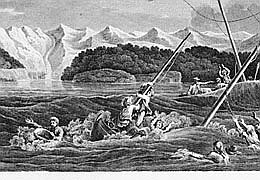 This engraving by M. Le Grand was included in the atlas that accompanied the multi-volume Voyage de La Pérouse Autour du Monde (Voyage of La Pérouse Around the World) published in 1797. It is based on an original sketch by M. Blondela, a lieutenant with the French expedition that visited the Northwest Coast in the summer of 1786.

Jean-François de La Pérouse commanded the French exploring expedition, which included two vessels, the Boussole and the Astrolabe. The expedition left Brest, France, in August 1785, and arrived off the Alaskan coast near Mt. St. Elias on June 26, 1786. After traveling south for several days, the Boussole and the Astrolabe dropped anchor in Lituya Bay, which La Pérouse named Porte des Français, or French Port. The expedition remained in the bay for nearly a month, departing on July 30, 1786. La Pérouse and his men were the first Europeans to first visit the bay, although the indigenous Tlingit inhabitants had by that time obtained some European goods through trade with other Natives in the region. Compared to other ports along the Alaska coast, Lituya Bay is actually a small inlet whose western and eastern basins end in dramatic active glaciers. “Lituya” is a Tlingit term meaning “the lake within the point.” This refers to the long, arching spit that narrows the entrance to the bay.

An oral history recorded in 1886 and published in 1911 recounts the local Hoonah Tlingit’s meeting with the La Pérouse expedition. Not having previously seen Europeans, the Hoonah Tlingit initially interpreted the Frenchmen’s arrival in terms of Tlingit mythology. They thought the two ships were large black birds, manifestations of the creator bird Yehlh, since he was known to transform himself into a raven. Although fearful of what an encounter might bring, local leaders and warriors ventured out to meet the French and consequently established trade relations. The French desired foodstuffs and Tlingit objects for scientific study while the Tlingit sought iron tools and nails. Although relations were sometimes tense between the Natives and newcomers due to cultural difference and misunderstandings, this first encounter did not provoke bloodshed. For example, when two boats carrying French sailors wrecked on the rocks while surveying the mouth of the bay, the local Hoonah Tlingit assisted the French in trying to recover survivors or the remains the dead. Unfortunately, neither the Tlingit nor the French were successful in this endeavor.