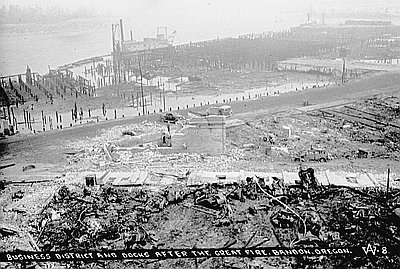 This photograph was taken by Portland photographer Wesley Andrews on September 27, 1936, the day after a fire devastated the South Coast town of Bandon. It shows what remains of the town’s business district and docks.

Upon his arrival in Oregon in June 1873, Irish immigrant George Bennett (1827-1900) and a handful of other colonists decided to establish a new community at the mouth of the Coquille River. “We thought it was just the very place for a town,” he later recalled, “and that it was only a question of time when there would be a very thriving one there.” Bennett named the future community after his home town Bandon, located in County Cork, Ireland.

Bennett brought with him an ornamental shrub (Ulex europaeus)—known variously as gorse, Irish furze, and Irish hedge—that soon became a common sight in the new town. Remembering his childhood visits to Bandon in the early 1930s, historian Thomas McClintock wrote that gorse filled the spaces between the town’s scattered buildings. “During one of our vacations in Bandon,” he wrote, “a fire started in the gorse which was rather frightening because of the intense heat and flames which rose a hundred feet into the air. Fortunately, on that occasion the fire was eventually brought under control with no loss of property.”

The residents of Bandon would not be so lucky on September 26, 1936. On that late summer day a forest fire burned several miles east of town, far enough away that the residents of Bandon were not particularly worried. A sudden shift in the wind, however, drove the flames swiftly westward. Ignited by the forest fire, the town’s abundant gorse exploded into an inferno. Bandon resident D.H. Woomer told a Coos Bay Times reporter shortly after the fire: “That Irish hedge was the worst thing—when the fire hit it right across from my house, the flames shot up high into the air. It was just as though there had been gasoline poured on the fire. And water was just no good against it—wouldn’t touch it! The stuff seemed just full of oil.” Ironically, just a week before the fire Frank P. McWhorter, the state plant pathologist, had warned Bandon’s residents of the fire hazards posed by the gorse.

The fire quickly swept through the town, laying waste to the business district along with hundreds of homes. Only a handful of structures were left standing by the time the fire died out. Most of the town’s 1,800 residents managed to reach safety, though ten died in the flames.