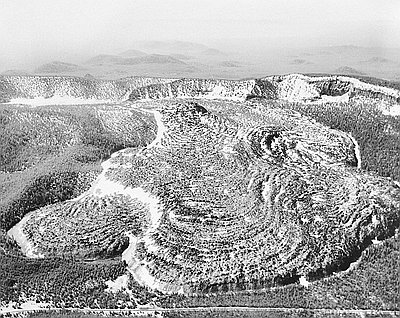 Newberry Volcano is a unique geological formation within Oregon, both in terms of its size and its composition. With a geologic history of some half million years, the volcano rises 3,600 feet above the nearby landscape, covering an area of more than 500 square miles, and containing a volume of over 110 cubic miles. Over many millennia, the volcano erupted continuously, forming the various lava flows, cinder cones, fissures, and lakes that comprise the national monument today.  Geologically still active, Newberry Volcano last erupted in 640 A.D., creating the Big Obsidian Flow shown here. Other well-known features include Paulina Peak, Paulina Lake, and East Lake, all of which lie within the zone identified as Newberry Crater. This caldera formed when the central portion of the original volcano collapsed eons ago.

Archeological research has concluded that Newberry Crater has been a site of intermittent human occupation for at least 10,000 years. Following the formation of the Big Obsidian Flow, local indigenous groups regularly quarried obsidian from the flow for use in the production of stone tools and weapons. The crater itself entered the historical record in the nineteenth century following the fur-trapping and exploring expeditions of Peter Skene Ogden and John C. Frémont. In 1855 the Pacific Railroad Survey expedition, headed by U.S. Army engineers Robert S. Williamson and Henry L. Abbot, passed through the Deschutes River watershed, and noted the existence of Paulina Creek, which originates in Newberry Crater. The caldera was later named Newberry Crater in honor of Dr. John Strong Newberry, the geologist who accompanied the Williamson-Abbot Expedition.

As a result of the activism of local residents, business representatives, and governmental officials, Newberry Volcano became a national historic monument in November 1990. The area, currently managed by the U.S. Forest Service, serves as a popular site for outdoor recreation.