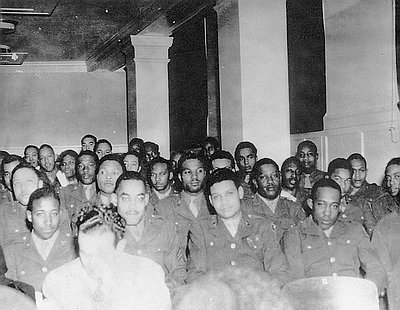 This photograph of black U.S. military soldiers in Portland, Oregon, shows men sitting together in an unnamed auditorium. They are attending an Urban League meeting designed for returning veterans who were having trouble finding employment after the war. The Urban League helped the veterans naviagate the discriminatory housing and labor policies in Oregon by providing access to education and job training.

In 1940, with the passage of the Selective Training and Service Act, efforts were made to open the nation’s armed services to equal participation by able-bodied men.  And, upon America’s entry into World War II, African Americans were courted by the federal government to take an active role in the effort to defeat fascism.  Unfortunately, black men who enlisted in the U.S. armed forces found themselves racially segregated, under the leadership of white officers, often relegated to non-combat duties, subjected to racial quotas, and denied the full range of career opportunities made available to their white counterparts.  The leadership of the U.S. armed services defended their racial policies as being in compliance with Plessy v. Ferguson, the Supreme Court decision that allowed for “separate but equal” facilities and treatment for whites and non-whites.  They also rationalized their discrimination of African American soldiers due to the latter’s supposed inferiority in armed combat and intelligence.

Many noted the irony of the United States defending the world from the aggression of a racist Nazi regime with a racially segregated military.  Efforts like the “Double V[ictory]” campaign, made popular by the Courier, a black newspaper based in Pittsburgh, called for victory against racist fascism both abroad and domestically.  And civil rights advocates, led by influential players such as activist A. Philip Randolph and former U.S. District Court Judge William H. Hastie, pressured the U.S. government to desegregate the armed forces completely.

While the armed forces remained thoroughly segregated throughout the duration of World War II, the military came under increasing scrutiny after 1945, when General George C. Marshall established the “Gillem Board” to study the racial policies of the U.S. Army.  Although it failed to endorse desegregation, the Gillem Board did call for the Army to “provide more opportunities for qualified blacks based on merit.”  President Truman went further in 1948 by issuing Executive Order No. 9981, which called for “equal treatment and opportunity” for African American servicemen.  Unfortunately, conservative military leaders were reluctant to follow the orders of the president.

Desegregation efforts in the armed forces were undertaken slowly until 1950, when hostilities with Soviet-backed North Korea erupted into full-scale war.  The renewal of the draft, combined with race-blind, battlefield-driven needs, finally created the conditions needed to overcome the resistance of segregationists within the military.  As the war dragged on, more and more soldiers found themselves fighting and working in racially integrated units.  In October of 1954, the U.S. Secretary of Defense announced that the last segregated unit of the military had been dissolved. Segregation and discrimination, however, was awaiting the men in the civilian world.