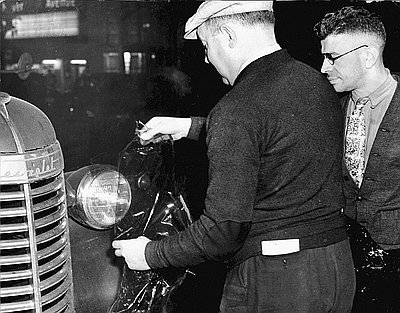 In order to comply with World War II blackout rules, people covered or painted over the upper part of car headlights.  During the war, Oregonians genuinely feared a Japanese invasion.  The production capacity of Portland’s shipyards made it a likely target.  The blackout rules were intended to make it more difficult for enemy planes to hit targets.  Portlanders were asked to have all lights turned off within 60 seconds of an alarm.

Oregon lay along the Pacific Coast, and the U.S. government considered it part of the combat zone.  Lieutenant-General J. L. DeWitt, commander of military defense operations in the western United States asked that cities near the Pacific coast be able to meet the 60-second deadline.  Portland Mayor Earl Riley issued the rules in response to DeWitt’s request.

Although the feared invasion never materialized, the Japanese military did attempt to use hot-air balloons armed with incendiary bombs that would travel across the Pacific and land on North America.  The incendiary bombs actually did very little damage, but they were involved in the only known incident in which American citizens were killed on U.S. soil as a result of enemy action.  An unexploded bomb was discovered at a church picnic in Bly, Oregon, near Klamath Falls. The bomb exploded while being handled, killing a woman and five children from the Sunday School.

Blackout rules were just one of the ways in which daily life changed during the war.  Gas and food rationing, housing shortages, civil defense drills, and changes in the composition of the workforce all had substantial effects on wartime living conditions.