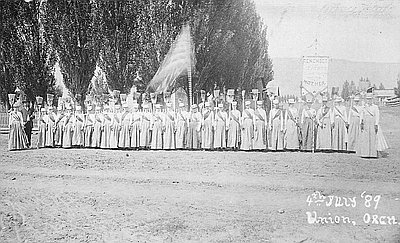 This photograph was taken on July 4, 1889. It shows the Broom Brigade of Union, a town in northeastern Oregon’s Grande Ronde Valley.

Broom brigades were women’s organizations that spread throughout the United States during the 1880s. Mark Twain observed in his 1883 book Life on the Mississippi that “in the West and South they have a new institution—the Broom Brigade. It is composed of young ladies who dress in a uniform costume, and go through the infantry drill, with broom in place of musket.” He described the broom brigade of New Orleans: “I saw them go through their complex manual with grace, spirit, and admirable precision. I saw them do everything which a human being can possibly do with a broom, except sweep.”

Union’s Broom Brigade was organized shortly before the town’s 1889 Fourth of July celebration. The Fourth of July was a major holiday in small town America during the post-Civil War period, and towns competed with each other to see who could put on the most extravagant display of patriotism. The July 4, 1889, issue of the Union Eastern Oregon Republican noted that “while the other committees were busily engaged arranging their plans for a successful celebration of the Fourth a number of the ladies conceived the idea of getting up something on their account the management of which should be entirely in their own hands. A meeting was organized, attended by a large number of ladies, married and single and after discussing a number of plans, the organization of a broom brigade was agreed upon.” The paper noted that “the brigade occupied a prominent place in the procession and was the recipient of much applause as it sturdily marched along, armed with their weapons of defense.”

Broom brigades embodied somewhat contradictory ideas about women’s roles in American society. On the one hand, broom brigades can be seen as expressions of what historians call the “cult of domesticity,” a nineteenth-century cultural movement that defined white middle-class women as submissive homemakers and caregivers. But in some ways broom brigades also subverted this cultural ideal. Although the toting of brooms certainly suggested domesticity, the military drilling and public displays of martial skills were expressive of the changing role of women in late nineteenth-century America, particularly their increasing participation in public life and in other activities previously deemed exclusively male.