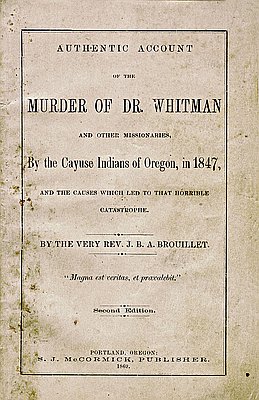 In late November 1847, a group of Cayuse attacked the Presbyterian mission at Waiilatpu, located near present-day Walla Walla, Washington. The group killed Marcus and Narcissa Whitman and several others, and took a group of some fifty hostages. The Cayuse attackers believed they had acted in self-defense in response to malevolent behavior towards the Plateau peoples by the Whitmans and others, including Henry and Eliza Spalding, missionaries among the Nez Perces (Nimi’ipuu). Since Marcus Whitman’s medical treatments helped settlers—but not the Cayuse—recover from infectious diseases, the Natives believed Whitman was deliberately harming them for the benefit of the land-hungery newcomers. Several days after the tragedy, Brouillet buried the bodies at the mission and managed to speak with the hostages. On his return trip to the nearby Catholic mission, Brouillet met Henry Spalding and warned him that the Cayuse would also target him and his wife. Brouillet gave Spalding what provisions he had and urged Spalding to flee for his life. After a harrowing journey, Spalding managed to rejoin his wife at their Lapwai mission. Before being evacuated to the Willamette Valley with his family, Spalding penned a letter to the local Catholic Bishop Augustin Blanchet, asking for assistance and urging restraint rather than retaliation against the Cayuse.

Despite his initial request for restraint, Spalding later publicly supported an armed campaign against the Cayuse and began to imply Catholic involvement in the attack on the Whitman mission. After Spalding’s earlier letter to Bishop Blanchet was published in the Oregon Spectator as part of an official report to the provisional governor, Spalding felt personally attacked by the Catholic missionaries. He thereupon published a series of articles in the Oregon American and Evangelical Union charging that Brouillet and other priests had incited the Cayuse to attack the Whitman mission. Brouillet’s response followed in 1853, with additional publications by Spalding and Brouillet in later years, including this second edition of Brouillet’s account. Pioneer chronicler William H. Gray repeated the charges of a Catholic conspiracy against the Protestant missions in his History of Oregon, published in 1870. This interpretation of a Catholic responsibility for the Whitman tragedy endured in later decades, fueling the anti-Catholic sentiment that helped give rise to the prominence of the Ku Klux Klan in the early twentieth century.