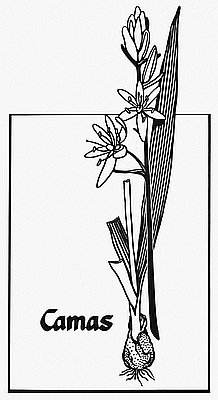 This drawing of the common camas (Camassia quamash ) was produced for the Oregon Historical Society by staff artist Skip Enge. The blue flowers of the camas, a perennial herb belonging to the lily family, were a common sight from April to June in the wet prairies, meadows, and streambeds of the Pacific Northwest prior to Euro American settlement.

Due to its great nutritional value, the camas root was a highly prized natural resource for the region’s indigenous population. The Kalapuyans and Chinookans of western Oregon, Columbia River Sahaptins, coastal and southwestern groups, Plateau peoples, and Northern Paiute all regularly harvested camas in the late spring and early summer. Camas harvesting, along with the collection of fruits and root vegetables, was the role of women within Native communities. They dug up the bulbs using specially-constructed digging sticks, which were also used to replant seed bulbs for subsequent harvests. Native peoples regularly set fire to lowland areas in order to maintain the open prairies necessary for camas production.

Historically, Native women cooked the camas bulbs in earthen pit ovens over the course of two days. This long preparation period was required to transform inulin (a starchy plant fiber), present in the raw camas, into fructose. The fructose in the cooked camas provided Indian peoples with a convenient sweetener for use in other foods. Camas cakes, produced from baked camas left to dry, were then stored for later use over the long winter months or used for trade with other regional groups.

Following Euro American colonization and the removal of Natives peoples onto reservations, the size of camas prairies shrunk dramatically in the Pacific Northwest. This was due to the cessation of the regular prairie burnings and the transformation of these areas into sites for agricultural production. However, the region’s Indians did not abandon the camas harvest. Today, many families continue to collect bulbs in the small areas where wild camas still grows—now increasingly cooked in modern ovens.