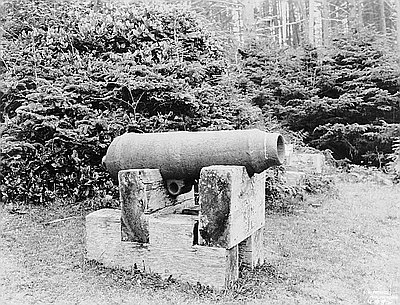 This photograph, taken by Arthur M. Prentiss, depicts the cannon that gave Cannon Beach its name. The cannon’s history includes a period as a U.S. Navy weapon, a buried shipwreck “treasure,” and a roadside attraction. The cannon is now preserved in Astoria’s heritage museum.

Cannon Beach’s cannon originated on the Shark, a U.S. Navy schooner built on the east coast in 1821. The vessel reached the Oregon coast in August 1846, only months after the United States and Great Britain signed the Treaty of Oregon establishing the border at the forty-ninth parallel. Despite rumors among the settlers that the U.S. sent the Shark in case conflict arose with Great Britain over the boundary question, the schooner’s mission was to survey the harbor at the mouth of the Columbia River.

Upon the completion of the survey, the Shark struck the Clatsop Spit as it attempted to depart from the Columbia. One large section of the wreckage split from the vessel, drifted across the bar, and washed ashore just south of Tillamook Head. A U.S. midshipman and several Indians freed one cannon from the wreckage and dragged it from the shoreline to a creek bed for safekeeping. Over time the cannon was lost from view, perhaps the result of a shifting creek bed or blowing sands.

Forty-five years later, former Seaside postmaster James Austin homesteaded and built a hostel south of Tillamook Head. The entrepreneur’s choice of location for the Austin House was a strategic business move—situated halfway along the Tillamook-Astoria mail route, the hostel served weary mail carriers and tourists alike. Business aside, the lore of the region sited an alternative reason for Austin’s choice of location—the hope that one day the legendary cannon might be rediscovered on his property.

That day came after a winter storm in 1898, when a mail carrier spotted the exposed cannon. Neighbors helped Austin haul the community’s namesake to the front of the Austin House. The cannon changed hands multiple times until 1956, when owner Mel Goodwin moved it to a site accessible to tourists on Highway 101. A replica of the famous Cannon Beach cannon replaced the original upon its removal to the Heritage Museum in Astoria.

Further Reading:
Gibbs, James A. Pacific Graveyard: A Narrative of Shipwrecks Where the Columbia Meets the Pacific Ocean. Portland, Oreg., 1965.