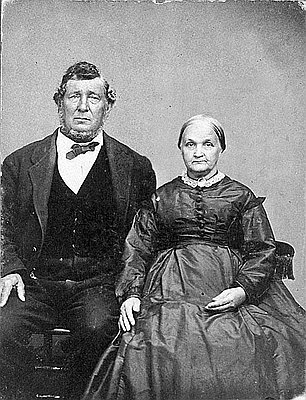 After making three voyages from New England to the Pacific Coast between 1840 and 1845, Captain John H. Couch became convinced that Portland’s deepwater location made its harbor superior to that of other potential ports in the area.  It was Couch who persuaded Asa Lovejoy and Francis Pettygrove that their Portland townsite should be platted, and Couch filed an adjacent claim just to the north of theirs.  Mercantile speculation marked Portland’s founding.

Couch returned to his native New England in 1847.  He had been absent from his wife, Caroline E. Flanders Couch, and his family for three years, but when news reached him of the discovery of gold in California, probably in late 1848, he and his wife’s brother, Captain George H. Flanders, responded quickly.  Couch and Flanders arranged to set sail for San Francisco in January 1849.  They filled their ships’ holds with lumber and other commodities to sell in California.

After Couch sold his cargo in San Francisco at a substantial profit, he sailed to Portland, convinced of its superiority as a port city and of its value as a base for supplying the gold rush trade.  He built a covered wharf and a warehouse on his own 640-acre claim.  He then platted the claim at an angle to match a bend in the river and included five narrow blocks that were meant to complement the nearby park blocks surveyed by early pioneer, Daniel Lownsdale in 1848.

Couch’s family apparently joined him sometime in 1849 because in 1852, his daughter, Clementine, wrote to a friend on the East Coast that in Portland both houses and ladies were now “numberless” when only three years before there had been but two proper houses and no ladies.

This 1850 photograph depicts two Portland wholesale firms, Couch & Company and Allen, DeWitt & Company, located on Front Street north of Ankeny. The original photograph, whose location is unknown, was made by the daguerreotype process on a metal plate; this image was copied from the daguerreotype. The photographer is …