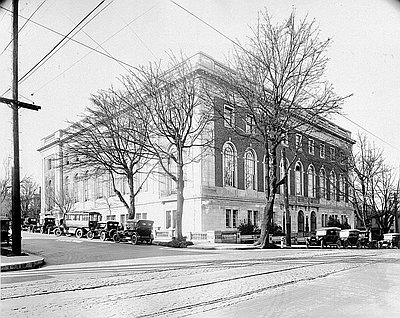 The Library Association of Portland became a public organization in 1902.  The Association reached an agreement with Multnomah County to extend service to all county residents in 1903.  Circulation skyrocketed and within a few years the Stark Street building, designed for a small private library, was unsuitable.

In 1912, Portland librarian, Mary Frances Isom visited the East Coast with Albert .E. Doyle, whose firm had been contracted to build the Central Library.  They toured libraries in major cities and consulted with the staffs in order to gather ideas for the Portland library.  The result was a Georgian style building noticeably influenced by the 1895 Boston Public Library and the 1850 Bibliothèque Sainte Geneviéve in Paris, among others.  The interior featured a simple plan with central stacks and circulation areas without corridors.  Built in 1913, the impressive building is still in use today, having reopened in April 1997 after a major renovation.