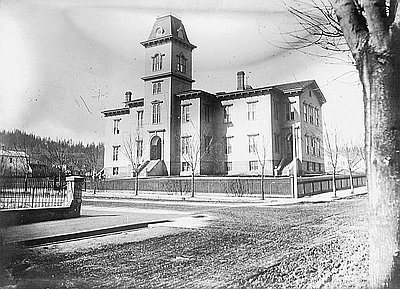 Until 1867, historian E. Kimbark MacColl writes, Portland’s sixteen Black children were “denied the public education guaranteed all children by legislation.”   It was then that a challenge prompted a school-board resolution to open a separate “colored” school.  The Colored School lasted five years, closing its doors in 1872 when Portlanders voted to admit Black children to the three local elementary schools.

In 1883, the entire block shown in this photo was sold to the Northern Pacific Terminal Company for $75,000, and the city moved the school building to Park Street.    The Portland Hotel was eventually built on the site and served as a hotspot for elite Portlanders and wealthy visitors to the city.