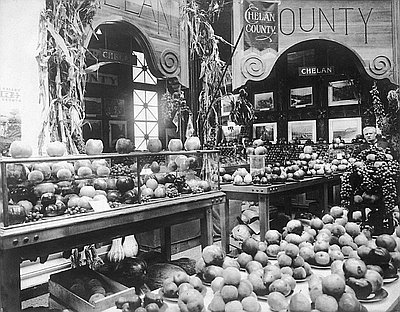 This 1905 photograph shows Chelan County’s exhibit at the Lewis and Clark Centennial Exposition, held in Portland from June through October 1905. Proudly displayed is a cornucopia of crops grown in the county, located in north-central Washington state. Although Chelan County only began to be settled in the late 1880s, by 1905 it was already producing massive apples, pears, and other fruit, as evidenced in this impressive display. Today it is among the top five counties in the United States for apple and pear production.

Washington state had its own building at the Lewis and Clark Exposition, considered by many to be one of the most beautiful structures at the fair. Built in a neo-classical style, the Washington Building measured 130 x 190 feet. It overlooked the Grand Stairway, the Terraces, and the Lake Front, three of the more popular attractions at the fair. Ionic columns supported the roof, which was ringed with American flags. The entire first floor of the building was devoted, as one souvenir book put it, to the “vast resources of the Great Northwestern state.” Included were displays of fruit, vegetables, grain, lumber, ores, and even a miniature mine.

The Lewis and Clark Exposition Commission expressed their gratitude to Washington and other West Coast states, which offered funding and other forms of support to help make the Exposition a success. The commission noted that “no State ever received more help and consideration from her family group than the State of Oregon” did from Washington, Idaho, and California. The governor of Washington—A.E. Meade—visited the fairgrounds to lend his support to the Exposition, and the state legislature authorized more than $80,000 to be spent on the state's exhibits.

Other states also participated in the fair, including California, Colorado, Idaho, Illinois, Maine, Massachusetts, Missouri, New York, and Utah, all of which had their own buildings. Arizona, Louisiana, Montana, Nebraska, North Dakota, and Wyoming also lent their support by appropriating funds for exhibits on their states.