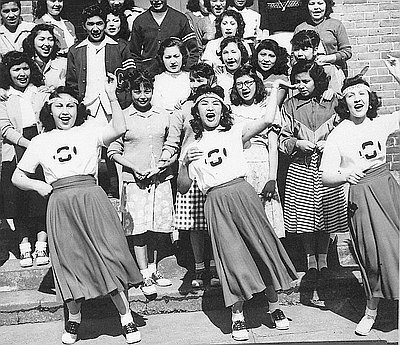 Chemawa is the nation’s oldest continually operating Indian boarding school, first established in 1880 as the Forest Grove Indian Industrial and Training School. Early on, the school suffered from poor funding and was defined by the staff’s harsh efforts to “civilize” the Native children that they considered to be “savage.” School administrators cut the boys’ hair, dressed the children in Euro-American clothing, and punished them for speaking in their native languages.

In 1885, the federal government moved the school to Salem and renamed it the Salem Indian Industrial School. Soon after, the school adopted the name of a local post office, Chemawa. In contrast to schools for Euro American children, Chemawa students did all the manual labor at the school. In addition, teachers primarily instructed the boys in farming and vocational trades and the girls in domestic skills, such as cooking and cleaning.

In the early twentieth century, the quality of Chemawa’s educational instruction improved and it became an accredited four-year high school. In the early 1930s, policy changes at the Bureau of Indian Affairs were reflected at Chemawa, where teachers began to provide instruction in traditional Native cultural arts, crafts, and history.

Despite the negative aspects of Chemawa, many Native students found their schooling to be a positive experience where they established fond relationships with one another and teachers. They joined a variety of clubs and participated in sports.

In the 1960s and 1970s, Natives and local tribes were able to take more control over Chemawa and its curriculum. As a result, teachers gave students lessons about their own tribal histories and governments, and elders taught them how to speak Native languages.