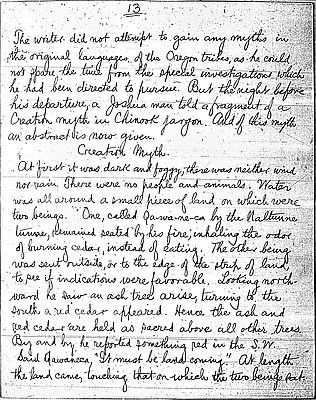 The Chemetunne Indians (also known as the Joshua Indians) of Oregon’s South Coast were speakers of a Tututni language, a member of the Pacific branch of the Athabaskan language family. Prior to white settlement of the region in the 1850s, Tututni speakers ranged along the South Coast between the Coquille and the Chetco rivers. The Chemetunne’s villages were located near present-day Gold Beach. Other Tututni speakers could also be found inland along the upper Umpqua River, the Sixes River, the lower Rogue River, the Pistol River, and the upper Chetco River. In the 1850s, the Chemetunne and other Indian groups from southwestern Oregon were forced to move north to the Coast Reservation, which later became the Siletz Reservation.

In the mid-1880s, James Owen Dorsey came to Oregon to do ethnographic work on the Siletz Reservation. Dorsey was an Episcopalian deacon who worked as an ethnologist with the Bureau of Ethnology and the Smithsonian Institution from the 1870s to the 1890s. Although he did not stay long in Oregon, he managed to record valuable information about the Native cultures of southwestern Oregon, including this Chemetunne creation myth, which was related to him in Chinook Jargon.

Another version of this myth was also recorded by Leo J. Frachtenberg in the 1910s. Both versions refer to a being—named Qawaneca in the Dorsey version and the Giver in Frachtenberg—who fashioned the earth and the animals, and who brought the sun to its present position in the sky. Both versions also refer to the descent of the Indians from an original man and woman, though only the Dorsey version includes reference to an afterlife.