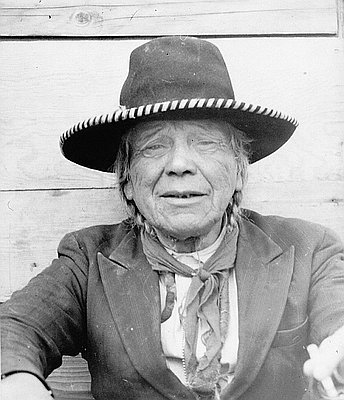 Chief Tommy Kuni Thompson (Wyam) was the chief of Celilo Village from the late nineteenth century until the 1950s. Over the course of his long lifetime, Chief Thompson witnessed a great variety of changes, both social and ecological, that came as a result of white resettlement of the region. While embracing some of these changes, he resisted non-Indian attempts to minimize his people’s legal rights, particularly when it came to salmon, the key element in the Wyam’s traditional economy.

Kuni, which means “full of knowledge” in the Sahaptin language, was born on the banks of the Columbia River sometime between the mid-1850s and the early 1860s. His great-uncle was the renowned Chief Stocket-ly, who signed the 1855 Middle Oregon treaty for the Wyams and was later killed while scouting for the U.S. Army. Kuni followed in his great-uncle’s footsteps, becoming chief at the age of twenty, the youngest man in recent memory to be so honored.

As leader of Celilo Village, Chief Thompson regulated access to the salmon fishery at Celilo, the most productive freshwater fishery in the region. He was also a strong advocate for his people’s right to harvest salmon, a resource upon which they had depended for millennia. He was a vocal opponent of Bonneville Dam, for example, and organized a successful campaign against proposed state fishing regulations that would have shut down the Indian commercial fishery after the completion of the dam in 1938.

His greatest challenge, however, came in the form of The Dalles Dam. Several tribes conducted a long and ultimately unsuccessful campaign against this dam, which flooded Celilo Falls and half of Celilo Village in 1957. While other groups eventually agreed to a settlement, Chief Thompson refused to negotiate with the government to the bitter end. More than a thousand people, both Indians and non-Indians, came from around the region to pay their respects to the chief upon his death in 1959.