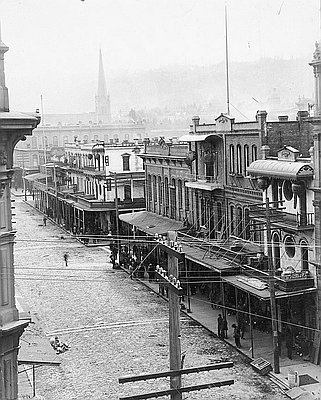 This picture shows an unusually quiet intersection at the corner of southwest Second and Washington streets, just a few blocks from Chinatown’s heart at southwest Second and Alder.  By the 1890s, some 5000 of Portland’s 46,000 residents were Chinese and they tended to live in the bustling streets of Portland’s Chinatown.  The covered sidewalks, round windows, and arched awnings in this photo are all typical features of Chinese-influenced building and seem to confirm that, at least a portion of Portland’s Chinese residents, felt they could profit from a longer-term investment in Chinatown business.  Chinese immigrants operated merchant businesses that catered primarily to Chinese patrons, gambling and opium dens, and dwelling houses that served the short and longer-term housing needs of sojourning Chinese immigrants.

Chinese merchants developed into a powerful group both among Portland’s Chinese residents and among white residents as well.  Most merchants belonged to traditional associations brought from southern China and transplanted in Portland.  These groups included clan associations, district associations, and tongs or, as often referred to in English-language newspapers, secret societies.  Tongs, perhaps the most frequently cited association, served a number of important functions.  They were benevolent organizations that helped new arrivals settle in Portland; they aided the sick and feeble; and they provided financial assistance in sending the remains of deceased Chinese back home to family burial grounds in China.

At the same time, tongs were powerful players in immigration and opium smuggling and prostitution networks that operated between China, Portland, and other west coast ports of entry.  Since Chinese immigrants first settled in Portland, rival tongs battled with one another for control of illicit trade and by the 1920s, this violence escalated to the point where powerful Chinese merchants and white authorities teamed up to mediate a solution to the violence.  Through these deliberations, the Chinese Peace Society was established and helped ease some of the violence in Chinatown.  The Peace Society eventually became the Chinese Consolidated Benevolent Association (CCBA), an organization which still exists today and serves as a school and benevolent organization in Portland’s Chinatown.