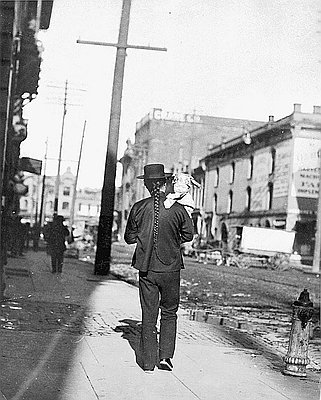 Many hundreds of Chinese immigrants began arriving in Oregon in the mid-1850s.  During these early years of immigration, most male Chinese immigrants, whether they were laborers, merchants, or houseboys, wore a long braid with silk woven into the ends, called a queue.  With time, assimilation to western dress occurred as is displayed by this man’s brimmed hat. Traditional hats were small brimless black silk caps or, for outdoor workers, a wide straw hat shaped something like a cone.

By 1890, Portland’s Chinese population had grown until one in ten residents was Chinese, however, few of these Chinese residents were women.  Anti-immigration laws targeted Chinese women as early as 1873 and strict anti-Chinese immigration laws directed against men and women continued to gain passage in Congress through the 1940s.

Most of the Chinese women who did come to Portland during the nineteenth century in particular, were forced to do so and were bought and sold through prostitution networks that operated between southern China and the United States.  The birthrate for Chinese children in Portland remained very low through the early 1900s making images like this one unusual.  By the 1920s, however, more Chinese women were permitted to join their husbands who took up permanent residence in the city and a second-generation of Chinese youngsters emerged.