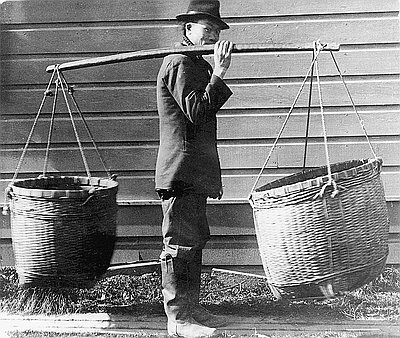 This vendor is probably selling vegetables. Chinese gardeners supplied a large proportion of Portland's residents with fresh vegetables. The vendors carried produce through the streets in large baskets like these, and laundry workers used similar baskets for collection and delivery of clothes and linens.

Employment opportunities were limited for Chinese but certain jobs were readily available particularly doing laundry and housework or serving as cooks, gardeners, and vegetable sellers. The majority of Chinese immigrants, however, worked hard labor jobs like clearing land and cutting timber for railroad construction and blasting tunnels also for the construction of railroads. Many of those who were able to save a little money opened small businesses serving both Chinese residents and the larger community and still others developed these businesses into highly profitable ventures, never returning to China but instead remaining in Portland permanently.

Chinese immigrants experienced discrimination and sometimes violence no matter their social position. Anti-Chinese immigration laws affected Chinese coming and going from U.S. ports of entry and angry mobs of white men attacked Chinese around Portland on more than one occasion. For example, in 1886, four years after the Chinese Exclusion Act, the Daily Oregonian offered rewards for information leading to the arrest and conviction of any person attempting to drive the Chinese out of the state or the country. There were also reports of a group of armed and masked "ruffians" who robbed several Chinese homes and rousted the occupants before attempting to blow up the home of some Chinese gardeners near Guild's Lake, north of the city. Portland's city government responded to such events with a force of newly commissioned police and volunteers who attempted to quell anti-Chinese mobs.