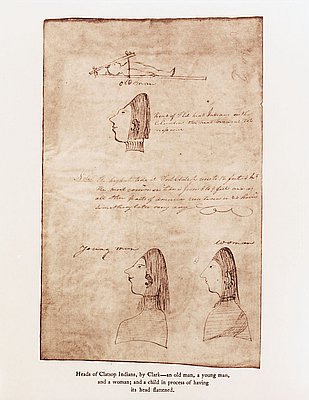 These illustrations from the journal of William Clark depict what many white explorers and fur traders considered to be a peculiar practice among the Chinookan people and other Northwest Coast Indians, head flattening. The sketch at the top of the page shows the method by which a baby’s head was shaped, while the bottom three sketches show the result.

Head flattening, a relatively common practice in the Americas, was a mark of status among the Chinookan people, who lived on both sides of the Columbia River from its mouth to The Dalles. The process began at birth and continued for another eight to twelve months until the child’s forehead was permanently reshaped. While perhaps appearing painful, head flattening apparently caused no harm.

Among the Chinookan people, only slaves and outsiders did not have flattened heads. The artist Paul Kane, who spent several months on the Columbia River in the 1840s, observed that it was common for slave-holding peoples to use conspicuous physical features to distinguish between slaves and freemen. Kane noted that the Chinookans looked with disdain upon “round heads,” whether white or Indian.

Although the custom had faded away by the end of the nineteenth century, people with flattened heads could still be found in Oregon as late as the 1950s. Alice Slim Jim Charley, a resident of Celilo Village in the late 1950s, was thought to have been the last living Columbia River Indian with a flattened head.