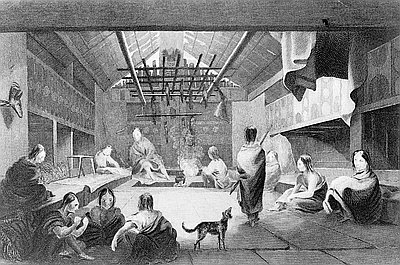 This engraving by Richard W. Dodson was based on a sketch by Alfred T. Agate.  Agate’s drawings, along with those of several other artists and scientists, illustrated Charles Wilkes’ multi-volume Narrative of the United States Exploring Expedition During the Years 1838, 1839, 1840, 1841, 1842, which was published for the general public in 1845.

The first U.S. government-sponsored maritime exploring expedition departed Norfolk, Virginia under the command of Lieutenant Charles Wilkes in August 1838. Comprised of six ships and more than 400 officers and seamen, the expedition spent four years completing a military and scientific survey of Antarctica, Australia, the South Pacific, California and the Pacific Northwest. The expedition visited the Pacific Northwest from May through August of 1841. During that time Alfred T. Agate, one of two official artists for the corps, completed the drawing of a Chinook lodge interior. Agate may have had access to a camera lucida, a portable optical instrument that assisted artists in producing drawings with greater accuracy.

The “Chinook” Indians in this engraving likely refers to the Chinook-proper, a Lower Chinookan group whose traditional territory was the north shore of the lower Columbia River estuary. The Chinook held a prominent place in Pacific Northwest during the pre-contact period (mid-1700s) and the early contact period (1780s-1830s). Their social and economic influence stemmed from a strategic geographic position at the mouth of the Columbia, which offered them a role as middlemen in aboriginal trade networks as well as the later maritime and overland fur trades. The scene depicted here illustrates distinctive aspects of Lower Chinookan society and culture in the early contact period. Like many Northwest Coast Native groups, the Lower Chinookans’ lived communally in monumental wooden structures. As riverine peoples, they relied on a salmon-based diet supplemented by wild game and fowl, local roots and plants, and additional goods gained through trade with regional Indian groups and in-coming Euro Americans.

The engraving shows the interior of a Chinookan winter lodge. In the middle of the lodge is a sunken central hearth with a fire for warmth, cooking, and smoking fish and meats, and along the sides are elevated bed platforms where people slept and stored their food and personal items. These large structures, some of which measured more than 7,000 square feet, were once common along the Columbia River, the home of roughly 15,000 Chinookan-speaking people in 1805-1806, when Lewis and Clark made the first population estimate of Native peoples in present-day Oregon and Washington.

When whites first came to the region, there were dozens of Chinookan villages ranging from the The Dalles to the Pacific Ocean. Although more sedentary than many Native groups in the Northwest, Chinookans generally shifted village sites according to the season. Summer villages, established to take advantage of the area’s abundant fish life, were relatively temporary communities usually set up along the river. Winter villages, often located on tributaries set back from the Columbia, were more permanent.

The Chinookan peoples were devastated by waves of epidemic diseases beginning with smallpox in the 1770s. Scholars estimate that more than 90 percent of the Chinookan population was wiped out by these epidemics, the worst of which was a malaria outbreak in the 1830s. Beginning in the 1850s, many surviving members of Chinookan groups were removed to the Grand Ronde, Warm Springs, and Quinault Indian reservations.

Many modern place names in Oregon are based on local Chinookan group names, including Clackamas, Multnomah, Wasco, Cathlamet, and Clatsop.