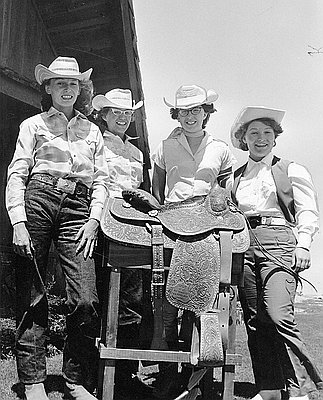 The photograph above was taken in July 1963 by an Oregon Journal photographer. It shows the Christmas Valley rodeo queen and her court. Rodeo queens act as representatives of rodeos, making appearances in rodeo promotions, riding in parades, and participating in opening events. They also act as representatives of the communities in which they live. Pictured from left to right are Princess Terry Ann Foster from Summer Lake, Princess Janice Foster from Summer Lake, Queen Marilyn Ward from Fort Rock, and Princess Velma Roper from Paisley. They are standing in front of a $400 trophy saddle that was awarded to Gib Gregg of Dayville, the All Around Cowboy of Christmas Valley’s second-annual Jackpot Rodeo.

Local historian Renee Laegreid notes that the 1910 Pendleton Round-Up was the first rodeo in the United States to crown a rodeo queen. Pendleton’s first rodeo queen, Bertha Anger, was selected based on the number of tickets she sold to the Round-Up, a selection process that other rodeos have also used to choose their queens. Most rodeo queens, however, are selected based on a mix of factors, including horsemanship, poise, and the standing of their family in the community. The 1963 Christmas Valley rodeo queen, for example, was selected by a panel of judges based in part on a horsemanship contest.

Cultural studies scholar Joan Burbick notes that rodeo queens in the early twentieth century saw the rodeo as a break from the monotony, isolation, and unrelenting hard work of ranch life, a chance to “dress up, go to town, and meet people outside the world of cattle and wheat.” This began to change in the 1960s, however, when most rodeo queens came from town and were one or more generations removed from ranch life. American rodeos also underwent changes in the 1960s, a decade when they began to strongly emphasize core conservative values, including patriotism, Christian morality, and traditional gender roles.

By the 1960s and 1970s, rodeo queens were seen by many as role models for wholesome all-American values and traditional gender roles. Burbick argues that this emphasis on conservative values was partly a reaction to the changing views of gender relations associated with the cultural revolution of the period. She notes that, by the 1970s, “rodeo was not a mere sport but a belief in an American style of life, based on conservative Christian principles and family values.”