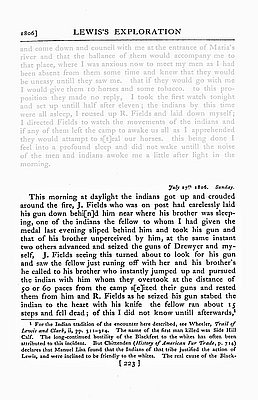 This excerpt from the journal of Meriwether Lewis describes a fatal conflict between members of the Corps of Discovery and a group of Piegans on July 27, 1806. The excerpt is taken from Original Journals of the Lewis and Clark Journals, 1804–1806, edited by Reuben Gold Thwaites and published by Dodd, Mead & Company in 1904–1905.

On July 26, a four-man contingent led by Lewis made contact with a group of eight young Piegan warriors near Two Medicine River, at the eastern edge of the present-day Blackfeet Indian Reservation. Although their initial meeting was tense, Lewis took up the Piegans’ offer to share their camp that evening. At dawn the next morning, the explorers awoke to find that the Indians had stolen their rifles and had slipped away before Joseph Fields, who was on watch, noticed what was happening. Fields raised the alarm, waking his brother Reuben, who gave chase. Reuben grappled with a Piegan named Side Hill Calf, grabbed his rifle back, then sunk a large knife into the man's chest, killing him almost instantly.

Lewis and George Drouillard managed to retrieve their weapons without shedding any blood; but once the Piegans realized their plan to steal the explorers' rifles had failed, they shifted their attention to the Americans’ horses. Lewis sprinted after two of the men, and as one of them, armed with a musket, turned around, Lewis shot him in the stomach. The Piegan fell to his knees, and fired a round at Lewis, barely missing him.

Both sides retreated, ending the engagement, and Lewis ordered his men to round up the horses. He burned the Piegans’ equipment, which they had abandoned during the mêlée. Then, in what historian Stephen Ambrose calls an “act of taunting and boasting,” Lewis put a peace medal around Side Hill Calf’s neck so “they might be informed who we were.” This was the only Native that members of the Expedition killed during the journey.

Ambrose puts the blame for the killing squarely on Lewis’s shoulders, who made poor decisions that led to the fatal encounter: traveling through Blackfeet territory with a small group, informing the Piegans that the Americans had plans to sell guns to their enemies, sleeping past dawn when the Piegans’ intentions were far from clear, and chasing after the Piegans after they had given up the stolen rifles. Historian Thomas Slaughter also blames Lewis for the encounter, but he clarifies that Lewis and his men were not in danger and that the incident was about protecting their property from theft.