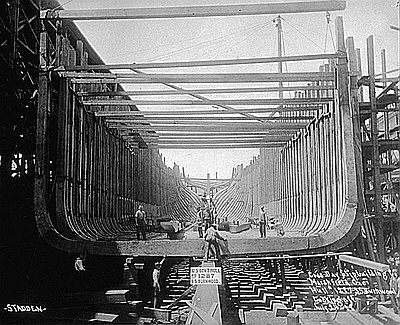 In the 1850s, Californian Asa M. Simpson started the first major shipbuilding business in the Coos Bay estuary, the largest natural harbor on Oregon’s coast. The Simpson Shipyard, located in North Bend, produced nearly sixty boats between 1859 and 1903. Many of the ships were used to transport lumber from Simpson’s lumber mills in North Bend and other Pacific Northwest coast towns to market in San Francisco.

WWI temporarily revived the wooden shipbuilding industry in Coos Bay. The CBSC and the Kruse and Banks Shipyard, established in 1905, each contracted with the government to build ten wooden steamships. CBSC workers were only able to produce four ships before the war ended in 1918, and the government canceled outstanding orders. The Pacific Northwest shipbuilding industry suffered a decline and many shipyards soon shut down, including the CBSC. The Kruse and Banks shipyard continued to operate, producing minesweepers for the government during World War II.

Until the 1980s, timber remained the largest industry in the Coos Bay region. Lumber from old growth trees was exported to ports in California, Asia, and Europe.