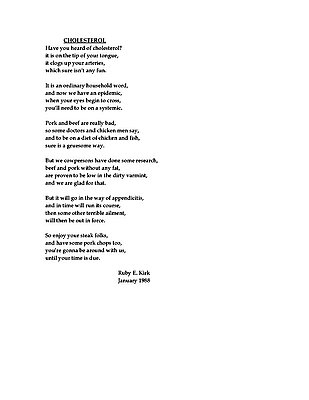 These five poems were written by Ruby Kirk between 1977 and 1998. The experiences written about range from her early school years, high cholesterol, coyotes, a husband’s snoring, and running cattle.

Ruby Kirk was born in Weston, Oregon in 1919. A life-long rancher, she began writing poetry in 1942 but didn’t start writing “cowboy” poetry until 1970. The tone of her earliest cowboy poems was serious and restrained, but that changed after 1986, when she had the opportunity to see Baxter Black (cowboy poet and humorist) at the National Cowboy Poetry Gathering in Elko, Nevada. Since then, as Kirk describes it, she’s “gone in for a little more nonsense.”

Cowboy poetry was first identified as its own literary genre in the post-war years of the American Civil War. In the mid-nineteenth century, ranchers began driving enormous herds of cattle northward from Texas. Cowboys typically drove their herds to the nearest railroad depots, often hundreds of miles, where their animals could be transported more efficiently to industrial stockyards where they would be “fattened-up” and slaughtered.  “Along the way,” according to folklorist David Stanley, “a variety of poem and song traditions were recalled, modified, reinvented, and regionalized, particularly the verbal art of sailors and soldiers, largely English and Irish in origin, which combined with the songs and hollers of black cowboys and the corrido tradition of the vaqueros.”

Since the days of the now-iconic cattle drives of the American West, cowboys have been writing (and oftentimes singing) poems about a wide variety of subjects.  Some of the most common themes include poems about: daily routines, injuries and/or deaths of family members and close companions, love affairs, family and home lives, a wide variety of domesticated and wild animals, urban and rural environments and communities, the end of the open range, the endangered lifestyle of cowboys and family ranching, Hollywood’s depiction of cowboys (since the 1930s), troubles with tourists and dude ranches, and political conflicts with environmentalists, large corporations, and land developers. Although most poems are now written for family-style audiences, crass and vulgar cowboy poems are still written and performed for private audiences.