Crater Lake and the Klamath 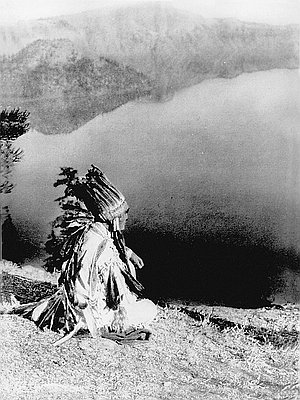 This photo shows a Klamath Indian man posing on the rim of Crater Lake in the early twentieth century. Unimpressed with the man’s regular clothing, the photographer, Edward Curtis, suggested he dress in Plains Indian garb.

This photo, though a posed shot, suggests the complex relationship the region’s Native peoples had with Crater Lake. At the time this photo was taken in the early 1920s, many Klamath still viewed Crater Lake as a place that should be visited only by shamans, chiefs, and others powerful enough to withstand the challenges of the mountain. Knowing he was not supposed to be there and not wishing to offend any powerful spirits, the man pictured gave Curtis a pseudonym to conceal his true identity.

The Klamath Indians’ long-standing relationship with Tum-sum-ne—“Mountain with the Top Cut Off”—is illustrated by their collective memory of the eruption of Mount Mazama more than 7,000 years ago. The Klamath people’s oral traditions describe “red-hot rocks as large as the hills” hurtling through the sky, oceans of flame devouring forests, the collapse of Mount Mazama, and the gradual filling of the resulting caldera with rain water to form Crater Lake.

It is popularly held that the Klamath avoided Crater Lake. While they did not avoid the mountain, they did consider it to be a particularly potent place to which only those physically, mentally, and spiritually prepared should venture. In the words of one Klamath: “It was powerful—too powerful for ordinary people.” In addition to hunting and gathering in the area, the Klamath and other Native peoples from around the region sought visions at Crater Lake. It was a sacred landscape, a portal between the world of humans and the world of spirits.

While the establishment of a national park has interfered somewhat with both spiritual and subsistence activities, Crater Lake still holds a great deal of religious significance for the Klamath, who continue to use the area for religious and subsistence purposes.

Further Reading:
Deur, Douglas. “A Most Sacred Place: The Significance of Crater Lake among the Indians of Southern Oregon.” Oregon Historical Quarterly 103, 2002: 18-49.