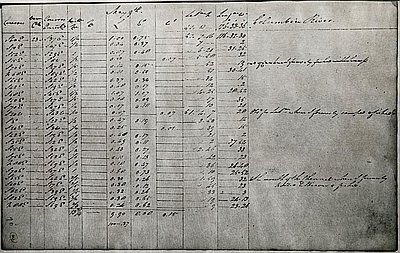 In the late 1840s, explorer and surveyor David Thompson wrote a journal of his travels over the past half century. He meticulously recorded his findings, including a detailed survey of the Columbia River in 1811. In the entry above, dated May 9th, Thompson charted ordinal measurements, current speeds, and in the right column, his personal observations. On this page he wrote, “here I formerly camped and fished,” and “the mouth of the Channel where I formerly killed a Beaver and fished.” He appended a summary of his journeys to his entry for July 14, 1811:

Thus I have completed the survey of this part of North America from sea to sea, and by almost innumerable astronomical observations have determined the positions of the mountains, lakes, and rivers, and other remarkable places on the northern part of this continent, the maps of all of which have been drawn, and laid down in geographical position, being now the work of twenty seven years.

He chose an appropriate date for his laudatory self-assessment. He had just led the first party down the entire length of the Columbia River.

From 1793 to 1796, Thompson surveyed northern Saskatchewan. In 1796, the Hudson’s Bay Company asked Thompson to stop surveying and dedicate more energy to procuring furs. As his third term of service with the company expired in 1797, Thompson joined the rival North West Company. Over the next two years, he explored present day Manitoba and Saskatchewan, traveling as far south as the source of the Mississippi and the Mandan villages on the Missouri. Over the course of the next twelve years (1799-1811), Thompson explored the Rocky Mountains, establishing a new route to Lake Athabasca and two new routes over the Rocky Mountains. He also surveyed the Columbia River from its source in present day British Columbia to its mouth on the Pacific coast. Thompson had hoped to establish a fur post at the mouth of the river, securing the first navigable route between Lake Athabasca and the Pacific Ocean, but he found that John Jacob Astor’s Pacific Fur Company had already established Fort Astoria.

Thompson returned east in 1812, settling near Montreal. In 1814 he delivered a map of western Canada to the North West Company. From 1816 to 1826, Thompson served as a member of the boundary commission surveying the international border south of Ontario. In 1843, he published two additional maps of the Northwest. Between 1846 and 1850, Thompson wrote an account of his travels. He died in 1857 having covered some 80,000 miles on foot, on horseback, and by canoe in sixty years of exploring and surveying.