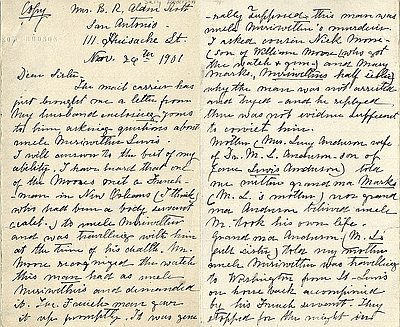 The death of Meriwether Lewis in the fall of 1809 has long been a subject shrouded in mystery and controversy. This much we know: on September 4, 1809, Lewis, then governor of Louisiana Territory, left St. Louis for Washington, D.C., to take care of some personal and professional business. After eleven days of traveling down the Mississippi River, Lewis and his servant John Pernier arrived at Fort Pickering, Tennessee. The captain of the river boat that transported Lewis later wrote that the governor was acting strangely on the journey from St. Louis, had twice tried to kill himself, and was in a state of “mental derangement” for several days after landing in Tennessee.

Lewis appeared to have recovered after a few days of rest at Fort Pickering, and at the end of September, he set off again for Washington. One of the men accompanying Lewis later noted that he again began acting “deranged in the mind” soon after leaving Fort Pickering. On the evening of October 10, 1809, Lewis, his servant, and another traveling companion arrived at the home of Robert Grinder. Though Mr. Grinder was not home, his wife was, and she offered the travelers room and board. By sunrise the next morning, the 35-year-old former explorer was dead, probably as a result of gunshot wounds to the head and chest.

Most of the mystery revolves around what happened in the early morning of October 11, 1809. Lewis’s family was under the firm belief that he was murdered by Pernier, his French servant. This viewpoint is expressed in the letter reproduced here, which was written in 1901 by Sally Anderson, a relative of Lewis. However, Thomas Jefferson, one of Lewis’s closest friends, was convinced his death was suicide, as were many others who personally knew Lewis, including his old friend and fellow explorer William Clark.

Most historians today also agree that suicide is the best explanation for Lewis’s death. Proponents of the suicide theory point to Lewis’s financial problems, his lack of success in love, his dissatisfaction with being governor of Louisiana Territory, his apparent inability to prepare the Expedition journals for publication, and a possible drinking problem. Other theories include Thomas Jefferson’s suggestion that the Lewis family may have had a history of depression, and epidemiologist Reimert Ravenholt’s argument that Lewis may have acquired syphilis during his journey to the Pacific, and that this disease led to Lewis’s mental illness and eventual suicide.