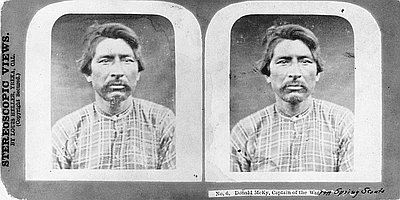 Louis Heller, a photographer based in Yreka, California, likely took this photograph of Donald McKay, in 1873 during the Modoc War. McKay was a well-known leader of the Warm Springs Scouts from the Warm Springs Reservation in central Oregon.

Born in 1836, Donald McKay was the son of the well-known fur trader Thomas McKay and a Cayuse woman. His elder half-brother, William McKay, was also well-known in both settler and Indian communities throughout Oregon. Donald spent his formative years in the Willamette Valley, living with his father and his step-mother, Isabelle Montour, and later with the family of his half-sister Mariah Groom. Beginning in 1852, Donald worked for both the U.S. Army and the Bureau of Indian Affairs in a variety of positions. During U.S. Army actions against the Northern Paiute in the 1860s, his brother William served as a captain of the Warms Springs Indian Scouts. Donald followed in William’s footsteps, serving as a captain of the scouts during the Modoc War (1872-1873).

The Warm Springs Scouts played an important role in the Modoc War. At one point, Donald McKay, at considerable risk to his own life, met with Kintpuash (Captain Jack), leader of the Modoc band, in an attempt to end hostilities. McKay’s endeavor was unsuccessful and the war continued, with serious losses for the Warm Springs Scouts, the army, and the Modoc. The war finally ended with the defeat of the Modoc in the summer of 1873, and the execution of several Modoc leaders in October 1873.

As a result of the intense publicity associated with the Modoc War, including the publication of photographs of Donald McKay and the Warm Springs Scouts, McKay enjoyed a measure of fame with the American public. Since his army wages for the Modoc War could not support him for long, McKay and his brother William embarked on a career in the “Wild West” shows then becoming popular in the United States. Donald later toured Europe with a theatrical troupe and participated in the American centennial celebration in Philadelphia in 1876. That fall, McKay met promoter “Colonel” T.A. Edwards, who sold patent medicines which were marketed as cure-all remedies.  During the 1880s, McKay and his wife Tuuepum (Susan) and their daughter Minnie toured the U.S. promoting the products of Edwards’ Oregon Indian Medicine Company. The venture, a combination of entertainment and homespun medicine, proved profitable. Edwards later published a promotional biography of McKay, entitled Daring Donald McKay; or, the Last War-Trail of the Modocs.

Donald McKay and his family settled on the Umatilla Indian Reservation in 1892, home to his Cayuse relatives. There McKay worked as a translator for the local Indian agency. He died in 1899.