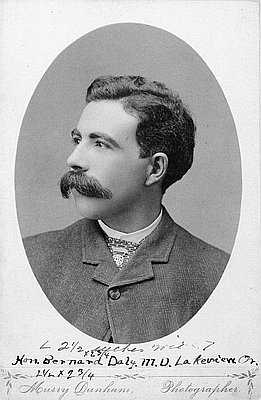 The photograph above shows Dr. Bernard Daly, an Irish immigrant who had a profound and lasting legacy on Lakeview and Lake County.

Born in Ireland in 1858, Daly emigrated to the United States with his parents, settling in Alabama. After earning degrees at Ohio’s Normal University of Ada and Kentucky’s University of Louisville, Daly moved to Lakeview, where he lived for the rest of his life. He practiced medicine in Lakeview for nearly thirty years, operated a profitable ranch in the Warner Valley, founded the town’s first successful bank, and was elected to a range of political positions, from school superintendent to state senator.

Dr. Daly earned an unwanted measure of wider fame in December 1894 after he drove his buggy from Lakeview through snow nearly one-hundred miles in twenty-four hours to tend victims of the ghastly Silver Lake fire. The little town in central Lake County had met with nationally reported tragedy on Christmas Eve when a tipped-over oil lamp started a fire in an upstairs lodge hall. The flames quickly engulfed the hall, which was packed with families celebrating a holiday pageant; the fire trapped and burned to death forty-three men, women, and children.

When virtually all of central Lakeview was destroyed by fire in May 1900, Daly’s financial credit and civic effort helped rebuild the town by October. Daly also helped bring the narrow-gauge Nevada-California-Oregon Railroad to Lakeview in 1912. He spent much of his life in public office, serving on the Lakeview town council, in the state legislature, as Lake County judge, as the first circuit judge of Lake County, on the school board of Lakeview, and on the board of regents of the Oregon State Agricultural College ― today’s Oregon State University.

A lifelong bachelor, Daly willed his substantial fortune to the people of Lake County in the form of the Daly Educational Fund, which has paid full college-tuition costs for generations of Lake County high school graduates. He wrote in his will: “It is my earnest desire to help, aid and assist worthy and ambitious young men and women of my beloved county of Lake, to acquire a good education, so that they may be better fitted and qualified to appreciate and help to preserve the laws and constitution of this free country, defend its flag, and by their conduct as good citizens reflect honor on Lake county and the state of Oregon.”